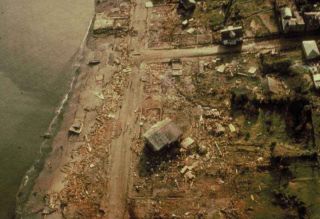 Along Chile's coast, the aftermath of the largest earthquake ever recorded, which hit on May 22, 1960.
(Image: © Unknown, Courtesy of NOAA.)

The largest earthquake ever recorded wa a magnitude-9.5 temblor that ripped along the coast of southern Chile on May 22, 1960. The colossal quake and the powerful tsunami that followed killed more than 1,400 people and left 2 million homeless in Chile. And its devastation reached far beyond South America.

The tsunami swept across the Pacific Ocean, wreaking havoc in Hawaii, the Philippines and Japan; a day after the earthquake, walls of water up to 18 feet (5.5 meters) high rushed ashore at Honshu, Japan's main island, destroying 1,600 homes and killing 138 people.

The colossal quake was what is known as a megathrust earthquake. These giant quakes, the most powerful quakes the planet is capable of unleashing, occur along subduction zones, where one tectonic plate dives beneath another. [The 10 Biggest Earthquakes in History]

In this case, the quake was caused when a 620-mile-long (1,000 kilometers) stretch of the Nazca plate, an oceanic plate that forms a large swath of the Pacific Ocean floor, lurched deeper beneath the South American plate, producing the only 9.5-magnitude quake on record.

Although figuring out an earthquake's power requires lots of complicated math and lots of data, magnitude boils down to three basic factors: area, distance and friction.

"It's about the physical properties of the fault," said Paul Earle, a seismologist with the U.S. Geological Survey.

To get the magnitude, Earle told OurAmazingPlanet, you multiply the area of the fault that slipped — how much real estate moved — by the distance it moved and by the amount of friction on the fault.

Fiddling with any of those factors will change the magnitude.

Yet some earthquakes are, by the mechanism that causes them, able to unleash far more power than others. All the most powerful earthquakes on record are so-called subduction earthquakes — the sort that happen where tectonic plates overlap.

And that's because they simply have more real estate at their disposal than earthquakes that happen in the middle of a continental plate, known as strike-slip earthquakes.

These earthquakes happen along faults that are, essentially, vertical — the San Andreas Fault is perhaps the most famous such fault in the United States.

The faults that produce strike-slip quakes plunge into the Earth's interior in a fairly straight line. That means they reach hotter, gooier geological territory — places where the rocks aren't rigid enough to make an earthquake — faster than the faults at subduction zones, which head into the Earth at an angle.

"If you go straight down, you get to the nonbrittle zone faster than if you go at an angle," Earle said. And that means strike-slip faults just don't have as much area as the angled faults at subdcution zones, and thus can't produce quakes with quite as much punch.

Yet strike-slip quakes can still cause catastrophic damage. And scientists are hard at work on designing systems that will provide a few seconds of warning when an earthquake hits, no matter what the mechanism that caused it.