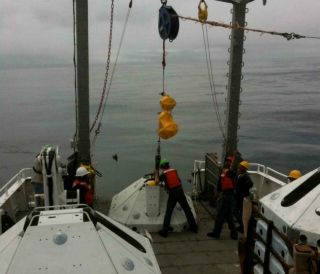 Scientists and technicians ready an ocean bottom seismometer for its trip to the seafloor off the coast of Washington.
(Image: © Maya Tolstoy, Lamont-Doherty Earth Observatory.)

The devastating might of Earth's mysterious movements was put on tragic display this year when the Tohoku earthquake struck off the coast of Japan.

The magnitude 9.0 quake was produced by a sudden lurch along a subduction zone, a place where one tectonic plate dives beneath another in an epic, slow-motion collision.

Unbeknown to many on the other side of the Pacific Ocean, a similar subduction zone lurks along the North American coastline.

The Cascadia subduction zone — a tectonic border region where the oceanic Juan de Fuca plate is grinding slowly beneath the North American plate — stretches from Northern California up to Vancouver Island. And although scientists are busily studying the fault, which has produced massive earthquakes in the past, some aspects of Cascadia's character and structure remain largely mysterious.

Barclay and a group of colleagues recently returned from an expedition to install 15 newly developed sensors off the coast of northern Washington state, in the first U.S. attempt to gather data on the portion of the fault trickiest to study — the part that lies under the ocean.

In late July, researchers spent more than a week aboard a research vessel, hoisting the 1,500-pound (680 kilograms) instruments overboard and, with the help of very long cables and a sturdy crane, settling each massive sensor on the seafloor.

The first instrument stands about 15 miles (24 kilometers) offshore. The devices, armed with seismometers and other sensing equipment, are spaced more than a mile apart in a line that marches out to sea. They will serve as silent sentinels, taking a torrent of data on the Earth's movements — whether minute or massive — at a rate of 125 samples per second. [Related: 7 Ways the Earth Changes in the Blink of an Eye]

The instruments, which resemble stooped pyramids, will not give up their secrets until a year from now, when scientists return to wrestle the devices off the seafloor, crack them open and see what data are captured inside.

"We expect to be able to hear magnitude 6.5 earthquakes — and above — from around the world, as well as local earthquakes," Barclay told OurAmazingPlanet.

One big incentive for deploying the instruments is that they will provide a way to image the Earth's insides, using the waves of energy sent from faraway earthquakes to make a geological map of the rocks that comprise the Cascadia fault. Knowing the arrangement of rocks, sediment and liquid inside the subduction zone will help scientists better understand how it works.

"It's somewhat analogous to doing a combination CAT scan and ultrasound," said Anne Trehu, a professor at Oregon State University and co-head of the recent expedition.

Yet it is the data on Cascadia's movements — data scientists can't get without putting a technological ear right against the subduction zone — that may help solve one of the fault's most enduring mysteries: Is the fault primed for a big earthquake?

At first glance, the Cascadia fault appears to be a quiet giant. It has produced only a few earthquakes in recent decades. The largest were California's magnitude 7.2 Petrolia earthquake in 1992, and Washington's magnitude 6.8 Nisqually earthquake in 2001.

Along the plate boundary, on the fault's seaward side, the quakes have fallen in the magnitude 4 range, none of them damaging. "It has been fairly quiet in our memories," Trehu said.

Yet scientists aren't fooled by Cascadia's relative timidity in recent years. The geologic record indicates the subduction zone has made dramatic moves in the past.

In 1700, Cascadia produced a magnitude 9.0 earthquake that in turn produced a monstrous tsunami, one that traveled across the Pacific Ocean and crashed ashore in Japan.

"You can draw analogies with earthquakes in recent years and the tsunamis from them," said Brian Atwater, a geologist with the U.S. Geological Survey who has studied the telltale signs left behind by Cascadia's last sudden rupture.

Cascadia has produced megathrust quakes of a similar scale for thousands of years, but "centuries pass between successive ones," Atwater said, "and that's why we don't have one within our 200 years of written history."

Although Cascadia has kept largely silent for 300 years, scientists recently made a surprising discovery: Deep inside the fault, beyond the zone that produces bone-shaking earthquakes people can feel, Cascadia keeps up a near-constant murmur.

"We know now that it is slipping fairly regularly deep down, and it's not slipping shallower, where it's locked," Trehu said.

About a decade ago, researchers discovered that between 22 and 34 miles (35 to 55 km) below the surface of the Earth, Cascadia produces strange, slow-motion earthquakes that creep along the fault at about 4 mph (6.4 kph), for two weeks at a time.

In contrast, damaging earthquakes that rupture closer to the surface streak along a fault at a supersonic clip — about 2 miles (3.2 km) per second.

Though they are imperceptible except to the most finely tuned instruments, the slow-motion earthquakes pack a seismic punch, all falling in the magnitude 6 range, in terms of the total amount of energy they release.

They also occur with astonishing regularity.

Known as Episodic Tremor and Slip (ETS) in scientific parlance, the earthquakes amble along the Cascadia fault roughly every 14 months in near-predictable cycles — and in maddening contrast to their destructive counterparts, which are notoriously difficult to forecast.

Many scientists think the slow quakes deep inside the fault could be building up stress in Cascadia's shallower regions, essentially prepping the fault for a large earthquake. However, the location of the slow earthquakes is important to this theory. "It depends on where it's occurring," Trehu said.

Answering that question will send scientists well on their way toward solving what amounts to a high-stakes seismic algebra problem.

On one side of the equation is the fault's overall movement over time. Scientists have a basic understanding of that figure. "We know what the large-scale motion should be," Trehu said.

To complete the equation, scientists have to hunt down all the sources of that movement. Regular earthquakes are one source, and a source that scientists can measure with some degree of precision — even the tiniest earthquakes broadcast their activities loudly enough for instruments to hear them.

However, slow-motion earthquakes — ETS — are sneaky. Instruments must be close by to pick up on them.

The newly installed ocean seismometers are designed to listen for slow-motion quakes along the seaward, shallower regions of the fault. If they are indeed occurring there, it could be that the fault isn't primed for disaster — at least not now.

"If the whole fault is slipping slowly, then it's not locked," and thus not storing up energy for a large earthquake, Trehu said.

Barclay said he's looking forward to getting his hands on the data a year from now, hoping they'll indicate whether the slow-motion earthquakes are occurring. "It's exciting for me because it's episodic — and up to now our idea of subduction zones is that things happen at random," he said.

However, Trehu said, the project has even grander ambitions than sniffing out hard-to-detect quakes and imaging the subduction zone. Ultimately, the goal is to understand how the entire system works — how and why earthquakes happen at all.

"It's poorly understood what factors control whether the rupture continues to propagate, what factors stop the rupture," she said, "and it's those factors that determine how big the earthquake is."

Scientists from more than six universities and institutions around the country have banded together for the Cascadia project, a years-long undertaking that is funded, in part, by the American Recovery and Reinvestment Act.

The researchers will make the data freely available to anyone who wishes to use it.

In the meantime, Trehu and Atwater said, people who live within the reach of the Cascadia subduction zone should be aware of the fault's potential. [Related: 7 Most Dangerous Places on Earth]

"People should definitely think about the fact that a large earthquake is probable, eventually," Trehu said. "A tsunami that's generated in Cascadia will only take tens of minutes to get to the coast. So if you're at the beach and you feel an earthquake, the best thing to do is get to higher ground as fast as you can."