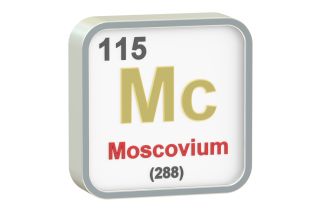 Moscovium is a radioactive, synthetic element about which little is known. It is classified as a metal and is expected to be solid at room temperature. It decays quickly into other elements, including nihonium.

The element had previously been designated ununpentium, a placeholder name that means one-one-five in Latin. In November 2016, the International Union of Pure and Applied Chemistry (IUPAC) approved the name moscovium for element 115.

Names for elements 115 and 117 were proposed by their discoverers at the Joint Institute for Nuclear Research in Dubna, Russia; the Oak Ridge National Laboratory in Tennessee; Vanderbilt University in Tennessee; and Lawrence Livermore National Laboratory in California. Both element names, moscovium and tennessine, honor regions where experiments linked to creating the elements took place.

Moscovium was discovered in 2003 and officially announced on Feb. 2, 2004. It was created and announced by scientists at the Joint Institute for Nuclear Research in Dubna, Russia, and scientists at the Lawrence Livermore National Laboratory in the United States.

Moscovium has four isotopes with known half-lives, the most stable of which is 289Mc, with a half-live of about 220 milliseconds.

To make moscovium, the scientists in Russia and the United States bombarded atoms of americium with ions of calcium in a cyclotron. This produced four atoms of moscovium.

Only a few atoms of moscovium have ever been made, and they are only used in scientific study. It is used to make nihonium.