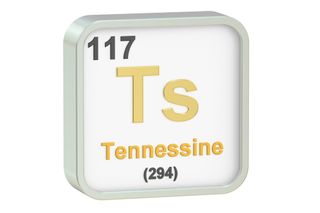 Tennessine is a radioactive, artificially produced element about which little is known. It is expected to be a solid, but its classification is unknown. It is a member of the halogen group.

The element, No. 117 on the Periodic Table of Elements, had previously been designated ununseptium, a placeholder name that means one-one-seven in Latin. In November 2016, the International Union of Pure and Applied Chemistry (IUPAC) approved the name tennessine for element 117.

Names for elements 115 and 117 were proposed by their discoverers at the Joint Institute for Nuclear Research in Dubna, Russia; the Oak Ridge National Laboratory in Tennessee; Vanderbilt University in Tennessee; and Lawrence Livermore National Laboratory in California. Both element names, moscovium and tennessine, honor regions where experiments linked to creating the elements took place.

Element 117 was discovered in 2010 and jointly announced on April 5 of that year by scientists at the Joint Institute for Nuclear Research in Dubna, Russia, and scientists at the Lawrence Livermore National Laboratory in California.

Tennessine has two isotopes with known half-lives and two with unknown half-lives. The most stable isotope is 294Ts, with a half-life of about 80 milliseconds.  It decays through alpha decay. Tennessine’s other isotopes are suspected to decay through both alpha decay and spontaneous fission.

The scientists who created tennessine bombarded atoms of berkelium with ions of calcium until atoms tennessine were produced.

Since only a few atoms of tennessine have ever been made, it has no practical uses outside of scientific study.