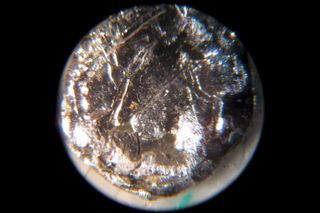 A disc of americium viewed under a microscope.
(Image: © Bionerd)

Americium, a silvery-white, synthetic element, is created during nuclear reactions of heavy elements. The element and its isotopes have very few but important uses including smoke detectors found in nearly all buildings and the potential to power future space missions.

Americium is a highly radioactive element that can be dangerous when handled incorrectly and can cause severe illnesses. Since it is not found naturally in the environment, there is very little chance that humans and animals would be affected by the element unless they are in very close proximity to plutonium-based nuclear reactors.

Glenn Seaborg, Albert Ghiorso, Ralph James and Tom Morgan discovered americium, as well as curium, in 1944 during their work at the wartime Metallurgical Laboratory at the University of Chicago (now known as Argonne National Laboratory), according to a 2008 article in the Bulletin for the History of Chemistry by Keith Costecka, an American chemist and environmental scientist. The researchers produced the synthetic element by bombarding plutonium-239 with neutrons to create plutonium-240, and then again to create plutonium-241. The plutonium-241 then decayed to americium-241. Americium is the third synthetic transuranic element and the fourth to be discovered.

The discoveries of americium and curium were announced in late 1945 by Seaborg on the live radio show Quiz Kids, according to a 2017 Nature article by Ben Still, a British scientist and author. The announcement was meant to have occurred five days later at a national meeting of the American Chemical Society. The element was named by researchers for the country that discovered it as well as a mirror to neighboring lanthanide element number, europium.

Americium was very difficult to isolate from curium and the process took over a year, according to Peter van der Krogt, a Dutch historian. The researchers nicknamed the elements pandemonium and delirium and even suggested that those names should become the elements' official names. Despite the researchers suggestions, the elements were given the names americium, after the continent of discovery and following the example of europium, and curium named for scientists Marie and Pierre Curie. The first substantial enough amount of americium that could be visibly studied was created in 1951, according to the Los Alamos National Laboratory.

Due to its rarity and radioactivity, the uses for americium are few. One such use for americium that is currently being researched is in batteries, specifically "space batteries." Research conducted by the United Kingdom's National Nuclear Laboratory (NNL), in conjunction with the European Space Agency (ESA), has shown promising results for obtaining the materials needed to build the americium-241 powered batteries. Researchers at the NNL were successfully able to design a method and successfully isolate americium-241 from plutonium. Further studies are currently being completed to examine the impacts that a larger-scale americium processing plant would have on the environment, as well as how to keep workers at such a plant safe. The long-term plan put forth by NNL would work to create a larger quantity of americium that can be used in the batteries.

In a 2008 article presented at a European Space Power Conference, K. Stephenson and T. Blancquaert, scientists at ESA based in the Netherlands, said that plutonium has been the favored fuel source due to its high power output and 88-year half-life. The isotope of plutonium that is required for such space missions is very expensive with an extremely limited supply and with restrictive regulations. Americium-241, on the other hand, only has about a quarter of the power output that plutonium has, but it has a longer half-life (433 years), more easily produced, and can potentially bring cost and weight down by about a third.

Another group of scientists in Israel is conducting tests on batteries powered by americium-242, according to a 2008 article presented at the Congress of Nuclear Societies by M. Kurtzhand, et al., a group of Israeli nuclear engineers. The researchers said that americium-242 has a high power output, and, according to an article published on The Future of Things about the project, could power the International Space Station for up to 80 days. The battery powered by americium-242 faces some difficulties due to americium-242 being more difficult to produce than americium-241, but the isotope leads to ideal battery properties such as the ability to be made incredibly thin (about one micron) and with no moving parts leading to a robust and reliable power source.