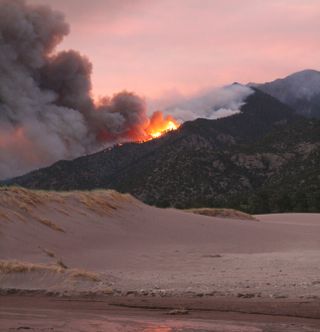 Once thought to be unpredictable, the erratic march of wildfires across a landscape can now be forecast like the weather, researchers say.

"Fires have always been thought of as a forest science problem," said Janice Coen, an atmospheric scientist at the National Center for Atmospheric Research (NCAR) in Boulder, Colo. "But when they bow into elliptical shapes, or do things that otherwise appear very strange, they appear very natural to us because they are similar to things we understand from thunderstorms, or modeling air flow over complex terrain like mountains," Coen told LiveScience.

By treating wildfires as a weather phenomenon, Coen and her colleagues have created a computer model that can predict fire behavior. "When we see a fire releasing a lot of heat into the atmosphere, that's a force on the air. There are consequences and rules about how that heat behaves, and we can model fire weather," Coen said. "There are many aspects about these large, wind-driven fires that are predictable."

Coen and co-author Wilfrid Schroeder of the University of Maryland recently tested their model against data from New Mexico's Little Bear fire, which burned more than 44,000 acres in June 2012 and was the most destructive wildfire in the state's history.

The model correctly forecast the wildfire's path and growth over a five-day period, according to the study, published Oct. 5 in the journal Geophysical Research Letters.

However, there's a crucial difference between their fire model and a weather forecast: There's no 10-day outlook. Running the computer model for more than a day creates too many errors, the researchers found. Instead, the best forecast comes from continually refreshing the model with new remote sensing data from satellites that track forest fires. [Raging Western Wildfires in Photos]

"We see a much more realistic simulation of the natural types of fire behavior, but the downside is once you start, accuracy goes down really rapidly," Coen said.

The new fire forecasting model cycles every 12 to 24 hours, refreshing itself with fire data from the Suomi NPP satellite. The satellite can detect forest fire heat in fine detail, which Schroeder confirmed by building a large bonfire in the backyard of his parents' home in Brazil. The satellite saw the bonfire.

Coen also tested earlier versions of the forecasting models for their skill at predicting real-world fires, just as weather forecasters do. (For example, when a new hurricane forecasting model is put through its paces, scientists see how well it predicts all past storms.)

Coen and NCAR are looking for funding to run the forecasting model in a real-world setting with firefighting agencies, she said. "If cemented, we could implement this in a year or two," she said.

For example, in a setting like Arizona's Yarnell Hill Fire in June 2013, the model can predict where fire conditions will suddenly change, "where the fuels, the terrain and the weather come together to make blowups," Coen said. The model could also help fire managers allocate scarce resources by forecasting which of several wildfires is most likely to intensify on any given day.

However, more research on the interplay between fire and weather is needed to accurately predict where specific thunderstorms might form and downdrafts might hit. The Yarnell disaster, which killed 19 firefighters, occurred when the fire suddenly changed direction, driven by monsoon winds.

"There is still research we need to do because some of these situations are very complicated," Coen said. "It ultimately boils down to making fire fighting safer, more efficient and more effective."