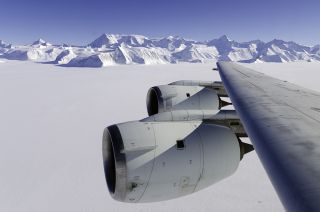 Mount Vinson is the highest peak in Antarctica, with an elevation of 16,066 feet (4,897 meters).
(Image: © NASA/Michael Studinger)

With an elevation of 16,066 feet (4,897 meters), Mount Vinson is the highest mountain in Antarctica. It is located on the southern part of the main ridge of the Sentinel Range of the Ellsworth Mountains.

Antarctica's highest peak has a prominence of 16,066 feet (4,897 meters), making it the eighth most prominent mountain in the world.

Where is Mount Vinson?

Situated near the Ronne Ice Shelf south of the Antarctic Peninsula, Mount Vinson is in the Ellsworth Mountains, which comprises two sub-ranges — the Sentinel Range in the north and the Heritage Range in the south. This is not only the home of Antarctica's highest point, but also the next five highest summits on the continent.

Mount Vinson is named for U.S. Rep. Carl Vinson of Georgia, who served in Congress from 1935 to 1961 and was the former chairman of the House Armed Services Committee. He was a champion of government funding for American exploration of Antarctica.

For many years, there was no specific name given to the highest peak and it was part of a group of mountains was known as Vinson Massif. The name encompassed the area's numerous summits, as "massif" is defined as a dense group of connected mountains forming a distinct section of a range.

As a result of several climbing and GPS mapping expeditions to the Sentinel Range, it was suggested in 2006 to the Antarctic Place Names Committee of the U.S. Geological Survey that the name Mount Vinson be used to signify the highest summit of the Vinson Massif. This suggestion was accepted, and the name of the highest peak was officially changed.

Temperatures in the Ellsworth Mountains average around minus 20 degrees F (minus 30 C), making it the coldest of the Seven Summits. The best period for climbing is December through February during Antarctic summer, when temperatures rise to minus 29 F (minus 20 C) and the sun is out 24 hours a day.

Most climbers ascend up the Branscomb Glacier, known as the Normal Route, and make it in about 10 days. About 1,000 climbers have summited Mt. Vinson, much fewer than the other Seven Summits. While other summits are more challenging from a technical climbing perspective, the cold, windy conditions and the short window of opportunity to climb keep many climbers from making it to the top. There is also the cost involved, which can be $30,000 or more because of the summit's remoteness.

1935: U.S. aviator Lincoln Ellsworth spies a small part of the northern end of the Ellsworth Mountains from the air.

1966-1967: The American Antarctic Mountaineering Expedition is the first to summit.  The team was led by Nicholas Clinch and included Barry Corbet, John Evans, Eiichi Fukushima, Charles Hollister, William Long, Brian Marts, Pete Schoening, Samuel Silverstein and Richard Wahlstrom. Corbet, Evans, Long and Schoening reached the summit on Dec. 18, 1966. The rest of the team made the summit over the following few days.

1979: Following the route the Americans had established a decade earlier, Werner Buggisch and Peter von Gizycki from West Germany and Victor Samsonov from the Soviet Union were the second group to summit on Dec. 22, 1979. Their expedition was not authorized. They left Samsonov's ski pole with a red flag, which helped the USGS get a better handle on Vinson's height, which was then determined to be 16,066 feet (4,897 meters). It was originally surveyed at 16,864 feet high (5,140 meters) in 1959.

1983: Dick Bass and Frank Wells — two U.S. billionaire businessmen — developed the Seven Summits concept (the highest peaks on each of the seven continents). The were joined by British climber Sir Chris Bonington and some Japanese climbers, as well as Rick Ridgeway and Steve Marts, who filmed the event. Bonington reached the summit first, with Bass, Wells and the others reaching the top a week later.

1988: Lisa Densmore, a U.S. climber, was the first woman to summit. Vern Tejas of the United States made the first solo ascent.

1991: German climber Rudi Lang was the first to ascend solo using a direct route on the west face.

1992: Robert Anderson, a U.S. climber, made the first ascent via the south face.

1997: American climber Conrad Anker was the first to summit using the west ridge.

2006: The headwall route, which had been used since 1966, was changed when ALE established the first ropes up the broad rib at the northern end of the west face.