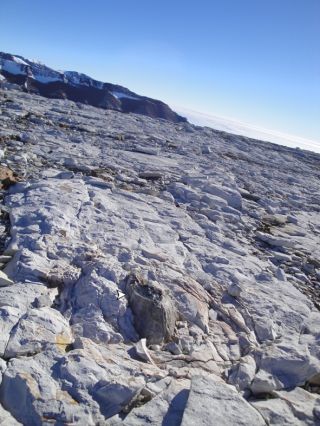 Some 250 million years ago, during the late Permian and early Triassic, the world was a greenhouse, much hotter than it is today. Forests carpeted a non-icy Antarctic. But Antarctica was still at a high latitude, meaning that just as today, the land is bathed in round-the-clock darkness during winter and 24/7 light in the summer.

The question, said Patricia Ryberg, a postdoctoral researcher at the University of Kansas Biodiversity Institute, is how plants coped with photosynthesizing constantly for part of the year and then not at all when the winter sun set.

"The trees are the best way to figure this out, because trees record physiological responses" in their rings, Ryberg told LiveScience.

Fossilized wood and leaf impressions record a history of the Antarctic forests. The leaf impressions appear to show mats of leaves, as if the trees had all shed at once — a sign of a deciduous forest.

To confirm this, Ryberg and her colleagues gathered samples of fossil wood and examined the tree rings. Wood cells in the rings reveal how the trees grew: Early wood is produced when the tree is growing upward and outward. Late wood is produced when the tree is preparing to go dormant. At that point, the tree stops growing and starts storing carbon in its cells. Late wood is denser than early wood, and has thicker cell walls.

Deciduous and evergreen trees have different patterns of late and early wood. Ryberg and her colleagues examined the Antarctic fossils and found that they looked evergreen. [Image Gallery: Life at the South Pole]

"Now we have leaves that suggest a deciduous habit and fossil wood that is suggesting an evergreen habit, so we have a bit of a contradiction going on," Ryberg said here Wednesday (Oct. 30) at the annual meeting of the Geological Society of America.

Much of the ring structure looks tropical, Ryberg added. Tropical trees that are not exposed to seasons experience a sort of short-term dormancy that echoes what is seen in the Antarctic wood.

"But they weren't growing in the tropics, so obviously it's two different environmental characteristics," Ryberg said.

Ryberg is now investigating how much plant matter these strange Antarctic forests produced. It's not yet clear whether the forests grew more densely than those seen in modern forests.