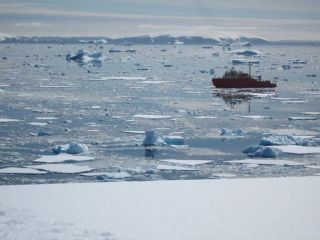 The last remnant of vegetation in Antarctica vanished about 12 million years ago, suggests a new study of tiny pollen fossils buried deep beneath the seafloor.

That last bit of plant life existed in a tundra landscape on the continent's northern peninsula, the researchers found.

The results, detailed this week in the journal Proceedings of the National Academy of Sciences, paint a detailed picture of how the Antarctic Peninsula first succumbed to ice during a prolonged period of global cooling. [Album: Glaciers Disappear in Before and After Photos]

In the warmest period in Earth's past 55 million years, Antarctica was ice-free and forested. The continent's vast ice sheets, which today contain more than two-thirds of Earth's freshwater, began forming about 38 million years ago.

The Antarctic Peninsula, which juts farther north than the rest of the continent, was the last part of Antarctica to succumb to ice. It's also the part that has experienced the most dramatic warming in recent decades; its average annual temperatures rose as much as six times faster than the global average.

The study's results, therefore, could reveal how the continent's ice sheets will react to rising global temperatures, the scientists say. "The best way to predict future changes in the behavior of Antarctic ice sheets and their influence on climate is to understand their past," said lead study author John Anderson, a marine geologist at Rice University in Houston.

The researchers relied on the National Science Foundation's icebreaker vessel Nathaniel B. Palmer for their cruises to the peninsula. Once there, the team had to drill through nearly 100 feet (30 meters) of dense sedimentary rock to get samples.

The first drilling cruise was tough. "It was the worst ice year that any of us could remember," Anderson said. "We'd spend most of a day lowering drill string to the ocean floor only to pull it back up to get out of the way of approaching icebergs."

Next, Sophie Warny of Louisiana State University, her students and colleague Rosemary Askin examined thousands of individual grains of pollen preserved in the muddy sediments, which represented the past 36 million years.

Gradually, the team pieced together a history of how much of the peninsula was covered by glaciers throughout the past 36 million years.

"There's a longstanding debate about how rapidly glaciation progressed in Antarctica," said Warny, who specializes in palynology (the study of fossilized pollen and spores). "We found that the fossil record was unambiguous; glacial expansion in the Antarctic Peninsula was a long, gradual process."

The results showed that slightly more than 40 million years ago, Antarctica boasted a diverse flora and experienced average temperatures of between 51.4 and 30 degrees Fahrenheit (10.8 to minus 1.1 degrees Celsius). From 34 million to 37 million years ago, reduced atmospheric carbon dioxide levels coincided with increased formation of mountain glaciers. During the Oligocene Epoch, which extended from 23 million to 34 million years ago, vegetation primarily consisted of southern beech and conifer-dominated woodlands and tundra. Limited pockets of this tundra still existed until 12.8 million years ago.