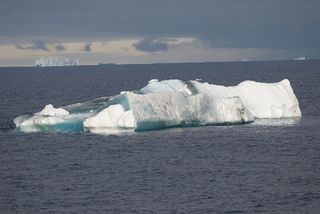 Ken Smith, from the Monterey Bay Aquarium Research Institute, and researchers from over a dozen institutions spent three month-long cruises in a part of Antarctica's Weddell Sea they dubbed "iceberg alley." Here, and elsewhere, more icebergs are breaking off ice shelves that extend from the continent.
(Image: © Debbie Nail Meyer © 2009 MBARI)

Rivers carry important nutrients to oceans, but no rivers pour from the frozen continent Antarctica into the Southern Ocean that surrounds it.

But now scientists say they have found an icy equivalent to a nutrient-bearing river — an area they have dubbed "Iceberg Alley," where 90 percent of the icebergs that break off from the continent's ice shelves congregate east of the Antarctic Peninsula in the Weddell Sea. [Image Gallery: An Expedition Into Iceberg Alley]

After three expeditions to Iceberg Alley, the team found that the icebergs gradually release iron, a nutrient crucial for life, as they melt, enhancing the plant life in the water around them.

"As a glacier on a continent, these glaciers in Antarctica are something like tens of thousands of years old, sitting on a continent and slowly moving toward the ocean, collecting windblown dust as they move over the years. They also are grinding up rock as they go," said Ken Smith, a biological oceanographer at the Monterey Bay Aquarium Research Institute (MBARI), who led the expeditions.

When it arrives carried by ice, the dust and ground rock become sources of iron in the iron-starved Southern Ocean. As a result, the glaciers fertilize the ocean as they melt, prompting an increase in the tiny plants, called phytoplankton, drifting around the iceberg.

This fertilization has implications for how much carbon, including the greenhouse carbon dioxide, is present in our atmosphere versus tied up elsewhere, in places such as the seafloor.

Satellite pictures have shown an increase in chlorophyll, the green pigment in plants, in the wake of an iceberg, according to Smith. As part of photosynthesis, these tiny plants suck carbon dioxide out of the air to make sugars (their food), and eventually, some of the carbon — in the form of dead plants or animals or fecal material — sinks to the bottom of the ocean.

Smith and his team looked at how icebergs, and their iron-fertilizer payload, affected this process. To make this possible, MBARI engineers, led by Alana Sherman,developed a sampling instrument, called a Lagrangian sediment trap, to pass under and around the icebergs. During its journeys, the sediment trap —which consisted of four cones connected to a sampling cup —collected the material falling toward the seafloor.

The researchers found that about twice as much carbon was sinking into the deep sea within the vicinity of an iceberg as compared with the open ocean. The icebergs can have a "halo effect" that enhances biological activity for kilometers around them, Smith said.

Global warming, caused by human-emitted greenhouse gases such as carbon dioxide, is believed responsible for a decline in ice over Antarctica. More ice breaking off from the continent's ice shelvesmeans more icebergs. If icebergs' fertilization effect is indirectly responsible for sending more carbon to the bottom of the ocean, it could be reducing atmospheric concentrations of carbon dioxide.

Smith hopes to explore this subject through future expeditions.

The current research appears as a series of articles published in a special issue of the journal Deep Sea Research Part II: Topical Studies in Oceanography.