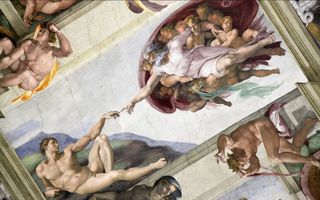 'The Creation of Adam' is one of the nine ceiling panels in the Sistine Chapel depicting scenes from the book of Genesis.
(Image: © Vlad G / Shutterstock.com)

The Sistine Chapel is a large chapel in the Vatican City. It is renowned for its Renaissance art, especially the ceiling painted by Michelangelo, and attracts more than 5 million visitors each year.

The Sistine Chapel stands on the foundation of an older chapel called the Capella Magna. In 1477, Pope Sixtus IV instigated a rebuilding of the chapel, which was then named for him.

The chapel is 40.23 meters long, 13.40 meters wide, and 20.70 meters high (about 132 by 44 by 68 feet) — reputedly, the dimensions of Solomon’s temple in Jerusalem, which was destroyed in A.D. 70. The chapel’s exterior is simple and unassuming, giving little hint to the splendid decoration inside.

Pope Sixtus IV commissioned celebrated painters, including Botticelli and Rosselli, to decorate the chapel. At this point, the Sistine Chapel’s ceiling was painted like a simple blue sky with stars.

In 1503, a new pope, Julius II, decided to change some of the Sistine Chapel's decoration. He commanded artist Michelangelo to do it. Michelangelo balked, because he considered himself a sculptor, not a painter, and he was hard at work sculpting the king’s tomb. But Pope Julius insisted, and Michelangelo began work on his famous frescoed ceiling in 1508. He worked for four years. It was so physically taxing that it permanently damaged his eyesight.

More than 20 years later, Pope Clement VII commissioned Michelangelo to paint the giant fresco "The Last Judgment" behind the altar. The artist, then in his 60s, painted it from 1536 to 1541.

At the highest part of the ceiling, Michelangelo depicted nine scenes from Genesis, including "The Separation of Light From Darkness" at the altar end of the chapel to "The Drunkenness of Noah" at the other end. The most famous panels are "The Creation of Adam" and "The Fall of Man and the Expulsion from Paradise." Images of prophets and pagan sibyls surround the panels, and twisting (and originally controversial) male nudes decorate the corners.

This fresco depicts the second coming of Christ, who is judging all mankind. The blessed are on the right and heading to heaven, while the damned are on the left and being sent to hell and tortured by demons. Major Biblical and Catholic characters appear in the scene, including Eve and several saints.

In 1990, some physicians suggestedthat the flying-seat shape and figure of God in "The Creation of Adam" makes up an anatomically correct image of the human brain. In 2010, it was asserted that "The Separation of Light From Darkness" panel contains a human brain stem. Other theorists have suggested that Michelangelo depicted kidney imagery on the ceiling.  As a sculptor, Michelangelo was fascinated by the human form. He studied cadavers to get a better sense of anatomy, and would have been familiar with the human brain.

Painting the Sistine Chapel was an exhausting task, and Michelangelo’s relationship with the Catholic Church became strained doing it. Perhaps to depict his unhappiness, he hid two miserable-looking self-portraits in "The Last Judgment."He painted his deceased face on Holofernes’ severed head and his ghoulish visage on Saint Bartholomew’s flayed skin.

A serious restoration of the Sistine Chapel began in 1980. Restorers spent 14 years reattaching fresco and cleaning it. They also removed some of the “modesty drapes” that had been added to Michelangelo’s work.

The chapel is more than an artistic masterpiece; it is a place of crucial religious activity.  Since 1492, the chapel has been the site where the College of Cardinals gathers to elect a new pope.  The chapel has a special chimney that is used to broadcast the cardinals’ voting status. White smoke indicates that a new pope has been elected, while black smoke signals that no candidate has received a two-thirds majority.

Tickets: To visit the Sistine Chapel, one must purchase an admission ticket to theVatican Museums. As of 2013, adult tickets are 16 euros ($22). There are reduced options for youth, students, clergy and some others. There are selected free admission days throughout the year, including the last Sunday of each month. Because lines can be extremely long, it may save time to purchase a ticket online.

Hours: The Vatican Museums are open Monday through Saturday and the last Sunday of each month. Typically, the ticket office is open from 9 a.m. to 4 p.m., and the museums close at 6 p.m.

Restrictions: There are a variety of restrictions at the Vatican Museums, including no alcoholic drinks, immodest clothing, flash photography, or touching the works of art. All photography and filming is forbidden in the Sistine Chapel.