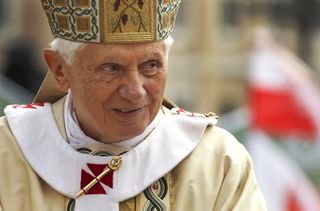 Origins of the conclave

The conclave, which means "with a key" in Latin, got its start during the tumultuous 13th century, when the Catholic Church spent two separate periods of a few years without a pope. Fed up, in 1243 the people of Rome locked up the cardinals until they decided on the successor, according to the Rev. Thomas Reese, the director of the religion and public policy program at Georgetown University. In 1271, people tore the roof off of the building where the cardinals were meeting and put them on a bread-and-water diet, hoping the discomfort would hasten the decision. Prior to that, political leaders often chose the pope. [Papal Primer: History's 10 Most Intriguing Popes]

While the original reason for the lock-in was to force a decision, now the silence in the Sistine Chapel is meant to allow the cardinals time for quiet reflection and prayer to hear the Holy Spirit. (The Holy Spirit is supposed to reveal to the cardinals the spirit's choice for the next pope.) Now the church forbids cellphones, Internet, newspapers and other modern communication into the conclave, and sweeps the room for electronic bugs prior to its start. When Pope Benedict XVI was elected in 2005, the Vatican raised the floor of the Sistine Chapel to place electronic jamming equipment beneath it, lest any Internet-addicted cardinals be tempted to send a text.

During the conclave, the cardinals will vote for their preferred choice of pope in the morning and the evening, every day until they come to a decision. For outsiders watching, the smoke exiting the Vatican's chimney will be the only clue to the process: Black smoke means the cardinals are deadlocked, while white smoke means that two-thirds of the cardinals agree and the next pope is chosen.

Historically, to make the black smoke, people added damp straw to the fire. But it turns out that sealing wax on the ballots also affected the color of the smoke, so when they did away with the sealing wax ballots in the 1950s, the smoke signals were ambiguous. Now the church adds chemical colorants to the smoke signals to create a clear-as-day sign to onlookers outside the Vatican.

Who can be pope?

In theory, any baptized male Catholic can rise to the highest office, but in practice, the front-runners are almost all cardinals. Once chosen, the new pope picks a new name, which typically signals his allegiance to a specific theology or set of priorities, said the Rev. Stephen Bevans, a theology professor at the Catholic Theological Union in Chicago.[Saint or Slacker? Test Your Religious Knowledge]

For instance, when Cardinal Joseph Ratzinger became Pope Benedict XVI, he chose the patron saint of Europe to signal his interest in reviving European Catholicism, while the two Pope John Pauls in the 20th century were conveying continuity with the ideas of the Vatican II Council, which addressed Catholic relations with the modern world. (The pope who began the council was John XXIII and the pope who finished it was Paul VI.)

But the new leader can technically pick whatever name he wants. On the off chance that he is elected, "I would be Pope Stephen," Bevans said.

The tradition of choosing a new name actually hearkens back to the Bible, Bevans said. For instance, after a vision of an angel wrestling with him, old testament character Jacob renamed himself Israel, which means "contended with God." And the first leader of the church, St. Peter, was known as Simon when he was one of Jesus Christ's apostles, Bevans said.

Once the pope is chosen, he is the pope effective immediately, with no time to prep a fancy speech or plan his next actions. To make sure that the newly elected pope is ready to immediately step out onto the Vatican balcony and greet the people in style, the church has several white robes in multiple sizes waiting, Bevans said. The pope used to don an all-red outfit, until Pope Pius the V did away with the red getup in favor of white in 1566. The last traces of the ancient fashion remain in the red shoes, cap and cape the pope wears. Benedict XVI favored designer $200 loafers made by a cobbler in Rome.

The man chosen as the next pope won't have much time to kick back and relax. Holy Week and Easter — the most important time on the Catholic calendar — is just a few weeks away.

The future pope will also face several big issues: dealing directly with the sex abuse scandal, solving the priest shortage, and energizing the church's dwindling flock in Europe and the United States, said Michele Dillon, a sociologist at the University of New Hampshire who studies Catholic culture in America.

The new pope will also face the challenge of evangelizing to an increasingly liberal population that holds different views on gay marriage, birth control, women in the church and other hot-button social issues, she said.

The sexual abuse scandals are still brewing, and a secret report was recently released to Benedict XVI, which may identify the members of the pope's inner circle who were responsible for leaking confidential church documents in a scandal the media is calling Vatileaks. While most of the cardinals will not have access to that report, the next leader will have to read the 2,000-page tome and do some housecleaning, Dillon said.

"There is no honeymoon period," Dillon said. "He really has to get going from the minute he's elected."