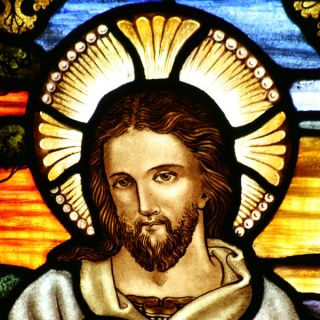 Jesus Christ may be the most famous man who ever lived. But how do we know he did?

Most theological historians, Christian and non-Christian alike, believe that Jesus really did walk the Earth. They draw that conclusion from textual evidence in the Bible, however, rather than from the odd assortment of relics parading as physical evidence in churches all over Europe.

That's because, from fragments of text written on bits of parchment to overly abundant chips of wood allegedly salvaged from his crucifix, none of the physical evidence of Jesus' life and death hold up to scientific scrutiny.  [Who Was Jesus, the Man?]

In a documentary called "The Nails of the Cross," set to air April 20 on the History Channel, filmmaker Simcha Jacobovici tells the story of two nails allegedly discovered in a 2,000-year-old tomb in Jerusalem. He presents circumstantial evidence that seems to suggest the rusty relics once nailed Jesus to the cross.

The tomb in which the nails were found is believed by some to be that of the Jewish high priest Caiaphas, who presides over the trial of Jesus in the New Testament.

"If you look at the whole story — historical, textual, archaeological — they all seem to point at these two nails being involved in a crucifixion," Jacobovici says in the film. "And since Caiaphas is only associated with Jesus' crucifixion, you put two and two together and they seem to imply that these are the nails."

In their coverage of the new film, Reuters reported that most experts and scholars they contacted dismissed the filmmaker's case as far-fetched and called it a publicity stunt.

It turns out publicity stunts abound when it comes to holy hardware. In 1911, English liturgical scholar Herbert Thurston counted all the nails that were at that time believed to have been used to crucify Jesus. Though only three or four nails (the exact number is up for debate) were supposed to have pinned Christ to the cross circa A.D. 30, in 1911, 30 holy nails were being venerated in treasuries across Europe.

In an entry in the Catholic Encyclopedia, Thurston, a Jesuit himself, offered this explanation for the surplus in hardware: "Probably the majority began by professing to be facsimiles which had touched or contained filings from some other nail whose claim was more ancient. Without conscious fraud on the part of anyone, it is very easy for imitations in this way to come in a very brief space of time to be reputed originals."

Along similar lines, enough wood chips from the "True Cross" – the cross on which Jesus was crucified – are scattered across Europe to fill a ship, according to this famous remark by the sixteenth-century theologian John Calvin: "There is no abbey so poor as not to have a specimen. In some places, there are large fragments, as at the Holy Chapel in Paris, at Poitiers, and at Rome, where a good-sized crucifix is said to have been made of it. In brief, if all the pieces that could be found were collected together, they would make a big shipload. Yet the Gospel testifies that a single man was able to carry it."

Perhaps the most famous religious relic in the world, the Shroud of Turin, is believed by many to be the burial cloth of Jesus. The 14-by-4-foot linen blanket, which bears the ghostly image of a man's body, has been worshipped by millions of pilgrims in a cathedral in Turin, Italy. But scientifically speaking, the Shroud of Turin is a fake.

Radiocarbon dating of the shroud has revealed that it does not date to the time of Christ but instead to the 14th century; coincidentally, that's when it first appeared in the historical record. In a document written in 1390, Bishop Pierre d'Arcis of France claimed the image of Jesus on the cloth was "cunningly painted," a fact "attested by the artist who painted it."

Today, the Catholic Church does not officially endorse the Shroud of Turin as authentic, though many of the faithful, including Pope Benedict, have indicated that they personally believe in its holiness.

A similar relic is the Sudarium of Oviedo, a blood-stained cloth that was supposedly wrapped around Christ's head when he died and which, since A.D. 718, has taken pride of place in a cathedral in Spain. Blood on the Sudarium is of type AB, common in the Middle East but not in Europe, leading many to believe it's the blood of Christ. However, according to Joe Nickell in his book "Relics of the Christ" (University Press of Kentucky, 2007) the Sudarium has been carbon dated numerous times to circa A.D. 695 – not long before it showed up in Oviedo.

Seventy metal books allegedly discovered in a cave in Jordan were hailed in recent weeks as the earliest Christian documents. Dating them to mere decades after Jesus' death, scholars called the "lead codices" (they're written in code and cast in lead) the most important discovery in archaeological history. Even BBC News stated: "Never has there been a discovery of relics on this scale from the early Christian movement, in its homeland and so early in its history."

Christians took the books to be proof of the real-life existence of Jesus, because one page displayed an image of him. Nearby, a fragment of text reading "I shall walk uprightly" was interpreted by many as a reference to Jesus' resurrection — strong evidence that it actually happened, coming so soon after the fact.

But as Life’s Little Mysteries reported, the lead codices are fakes — a jumble of anachronistic dialects and borrowed images probably forged within the past 50 years. "The image they are saying is Christ is the sun god Helios from a coin that came from the island of Rhodes," Oxford archaeologist Peter Thonemann told the press. "There are also some nonsense inscriptions in Hebrew and Greek." The main scholar who had been backing their authenticity was later revealed to be a fringe thinker with no real credentials.

Fake Christian relics such as the codices are relatively common, said Kimberly Bowes, a Roman and Greek archaeologist at the University of Pennsylvania. "Modern people's urge to find material evidence from the first two centuries of Christianity is much stronger than the actual evidence itself," Bowes told Life's Little Mysteries. "This is because the numbers of Christians from this period was incredibly small — probably less than 7,000 by A.D. 100 — and because they didn't distinguish themselves materially from their Jewish brethren."

One of the most important archaeological finds that actually dates to the time of Jesus may or may not provide evidence of his existence, depending on who you ask. The Dead Sea Scrolls, a vast trove of parchment and papyrus documents found in a cave in Israel in the 1940s, were written sometime between 150 B.C. and A.D. 70. In one place, the scrolls refer to a “teacher of righteousness.” Some say that teacher is Jesus. Others argue that he could be anyone.

Before Jesus was crucified, the Gospels say, Roman soldiers placed a crown of thorns on his head in a painful mockery of his sovereignty. Many Christians believe the thorny instrument of torture still exists today, albeit in pieces scattered across Europe. One near-complete crown is housed in Notre Dame Cathedral in Paris. The documented history of Notre Dame's Crown of Thorns goes back at least 16 centuries — an impressive provenance — but it doesn't quite trace back to A.D. 30. Furthermore, as Nickell points out, Notre Dame's crown is a circlet of brush, and is completely devoid of thorns.

The Good Book itself

The best argument in favor of Jesus as a once-living person is, of course, the Holy Bible itself. The Synoptic Gospels of Matthew, Mark, Luke and John are thought by scholars to have been written by four of Christ's disciples in the decades after his crucifixion. There are still other Gospels, never canonized but written by near-contemporaries of Jesus all the same. Many details differ between the various accounts of his life and death, but there's also a great deal of overlap, and through centuries of careful analysis biblical scholars have arrived at a general profile of Jesus, the man.

"We do know some things about the historical Jesus — less than some Christians think, but more than some skeptics think,” said Marcus Borg, a preeminent Biblical scholar, author and retired professor of religion and culture at Oregon State University. “Though a few books have recently argued that Jesus never existed, the evidence that he did is persuasive to the vast majority of scholars, whether Christian or non-Christian.”

The following description, surmised from the Gospels, would be affirmed by most history scholars, Borg told LiveScience:

Jesus was born sometime just before 4 B.C. and grew up in Nazareth, a small village in Galilee, as part of the peasant class. Jesus' father was a carpenter and he became one, too, meaning that they had likely lost their agricultural land at some point. Jesus was raised Jewish and he remained deeply Jewish all of his life; he never intended to create a new religion. Rather, he saw himself as acting within Judaism.

He left Nazareth as an adult and met the prophet John, who baptized him. During his baptism, Jesus likely experienced some sort of divine vision. Shortly afterwards, he began his public preaching with the message that the world could be transformed into a "Kingdom of God." He became a noted teacher and prophet, as well as a healer: More healing stories are told about Jesus than about any other figure in the Jewish tradition.

He was executed by Roman imperial authority, and his followers experienced him after his death. It is clear, Borg said, that they had visions of Jesus as they had known him during his historical life. Only after his death did they declare Jesus to be "lord" or "the son of God."