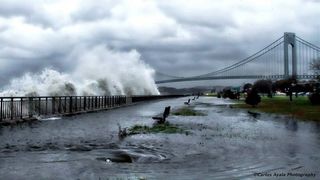 Waves crash ashore near the Verrazano Bridge in Brooklyn, N.Y., ahead of Hurricane Sandy's landfall on Monday, Oct. 29, 2012.
(Image: © caphotosnewyork, via Flickr)

By the time Hurricane Sandy hit the northeast coast of the United States one year ago, it had weakened in wind speed from a Category 3 to a Category 1 storm. But people living in the storm's path quickly learned that this lower rating said little about the storm's destructive capacity.

By landfall, wind speeds had fallen below 94 mph (153 km/h) — the cutoff for Category 1 hurricanes — but the storm surge (the water that a storm pushes in front of itself above predicted tide levels) was greater than any other surge recorded in New York City's history, reaching up to 14 feet (4.3 meters) in lower Manhattan. Many of the 150 deaths associated with Sandy have been attributed to flooding from this surge along the New York and New Jersey coastlines.

This outcome was not unique to Hurricane Sandy: Flooding from storm surge has caused more deaths during hurricanes than any other hurricane threats — such as winds and freshwater flooding from rainfall — combined since 1900, according to the National Hurricane Center (NHC). And yet the NHC's official hurricane category system — meant to efficiently warn residents of a storm's destructive capacity — does not convey the threat of flooding.  [Hurricane Sandy: Photos of a Frankenstorm]

This is because the official Saffir-Simpson Hurricane Scale is based entirely on a storm's wind speed, which, it turns out, has little to do with the surge it produces.

"There is no relationship," James Brinkley, a member of the National Hurricane Center's storm surge unit, told LiveScience, citing a number of inconsistent figures from past hurricanes.

For example, Hurricane Katrina, which was a Category 3 storm, had a storm surge of more than 20 feet (6 m) in some locations. Hurricane Charley, on the other hand — which hit Florida in 2004 — was a Category 4 storm, but only caused storm surges of about 8 feet (2.4 m), Brinkley said. [5 Hurricane Categories: Historical Examples]

In the past, the NHC included brackets of estimated storm surges for each category in their Saffir-Simpson Scale. But, as a result of a long string of inconsistencies within the last decade, officials decided to eliminate these estimates in 2010 to prevent public confusion. The bracket for a Category 1 storm had been 3 feet to 5 feet (1 to 1.7 m), which would have suggested only a fraction of Sandy's surge.

In response to this string of destructive storms — including Katrina (2005), Ike (2008), Irene (2011) and Sandy (2012) — researchers have begun looking more closely at the effects that drive storm surge, with some hoping to help implement an official storm surge scale that could be put into action on a national level.

Hal Needham, a researcher at Louisiana State University, has compiled the most comprehensive storm surge database yet, with information gathered from hundreds of newspaper archives, government documents and academic reports dating from the present back to the late 1800s, and representing more than 200 surge events spanning the Gulf Coast up to the Northeast.

The results highlight four main factors that control storm surge: The shape of a coastline, the depth of coastal water, and the wind speed and storm size prior to landfall, specifically, about 18 hours before a storm hits land.

Sandy's massive offshore wind field — with a radius of about 207 miles (333 km) of hurricane-force winds — factored into its massive surge, Needham said. This was also the case with Katrina, which had a radius of about 135 miles (217 km). Charley, on the other hand, only had a radius of about 25 miles (40 km). The shallow and confined nature of the New York Bay and Lake Borgne, which borders New Orleans, also factored into the large storm surges produced in these two regions. The coast of Florida where Charley made landfall, on the other hand, is relatively less confined and drops off into deeper ocean faster than the coastlines of New York and Louisiana.

Needham's team is still teasing out which, if any, of the myriad factors plays the largest role in surge height.

"We are finding that it is much more complex than most people would realize," Needham told LiveScience. "We are still working to understand how these factors all work together."

Jennifer Irish, a coastal engineer at Virginia Tech who also studies the relationship between storm surge and wind speed, agrees that the pre-landfall size and speed of a hurricane play a crucial role in flooding.

"What we found is taking the hurricane statistics 90 nautical miles offshore gives us the best estimate of storm surge," Irish told LiveScience.

This estimate is roughly — but not exactly — in line with Needham's estimate of 18 hours prior to landfall, Irish said.

Taking these factors into account, Irish's team has produced a new surge scale that they believe is ready for implementation and could significantly improve public preparation for hurricane threats. The NHC has not yet adopted it, but the team hopes that they will within the next couple of years.

"It takes time to work through the system," Irish said. "But I do think the scale we have is easy to apply and just as easy to use as the current category scale."

Brinkley, with the NHC's storm surge unit, said NHC officials are also making an effort to improve the category system.

"This is something that is going to take time," Brinkley said. "We are always making improvements, but we still have a lot more to accomplish."