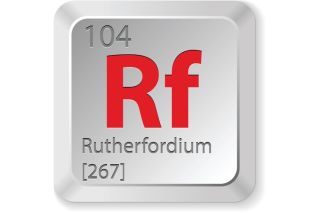 Discovery: There has been some controversy over the discovery of rutherfordium. It was first reported by a team of scientists in Dubna, Russia, in 1964.  They identified and isotope, 260Rf, with a reported half-life of 0.3 seconds. They later changed the report of their findings to say that 260Rf had a half-life of 0.15 seconds. In 1969, a team of scientists at the University of California, Berkeley, attempted to reproduce the results of the Dubna team, though they used different methods. While they produced four isotopes of rutherfordium, reports as to whether or not they were able to produce 260Rf vary, and so does the official recognition of which team receives credit for the element’s discovery.

Rutherfordium is a synthetic element and little is known about its properties. It is presumed to be a solid metal. It is the first transactinide element, and is presumed to have chemical properties similar to hafnium.  [See Periodic Table of the Elements]

Rutherfordium has 12 recognized isotopes with known half-lives. The most stable is 263Rf, which has a half-live of ten minutes. It decays through spontaneous fission.

Rutherfordium is produced artificially and only small amounts have been made. The Dubna scientists produced it by bombarding plutonium with accelerated 113 to 115 MeV neon ions. The Berkeley team produced four isotopes by bombarding 249Cf with 12C nuclei of 71 MeV, and 13C nuclei of 69 MeV.

Only small amounts of rutherfordium have ever been produced and its isotopes have very short half-lives. For this reason, its only use is within scientific research.