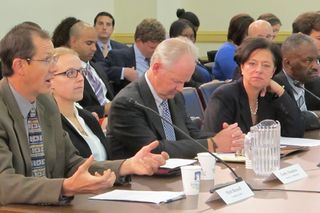 Rocky Kistner is a communications associate for the NRDC. This post will appear on the NRDC blog Switchboard. Kistner contributed this article to LiveScience's Expert Voices: Op-Ed & Insights.

As the world's climate scientists increasingly sound the alarm about the growing threats of climate change, more and more people hard-hit by the rising tide of dangerous extreme weather events are demanding that Congress take action.

Those voices were loud and clear when the Congressional Safe Climate Caucus held a forum on climate change Sept. 17, 2013, on Capitol Hill, as many told heart-wrenching stories about the punishing impacts of climate change hitting their communities across the United States.

Their stories were powerful and diverse, telling tales of crop-crippling drought in farms across the midwest, ravaging fires in the Sierra Nevada mountains in the west, and record-setting hurricanes and flooding along the east coast and the Gulf of Mexico. But all shared a common message: climate change is real and fueling more dangerous extreme weather events. They implored Congress to take action to cut carbon pollution and promote policies that will protect future generations from even greater climate threats predicted by scientists. Rep. Henry Waxman (D-CA), chairman of the Safe Climate Caucus, said these were voices that more Americans need to hear.

"Your experiences are proof that climate change does have consequences," Rep. Waxman told the witnesses. "Congress needs to hear from you and have you explain how a rapidly changing climate can exact a tremendous toll on communities across the country. Remarkably, this is the first time that individuals like you have come before Congress to tell your stories. But it should not be the last time. Every member needs to hear from his or her constituents about the costs of inaction and the dangers of ignoring the science."

Here are their stories:

Matt Russell knows a thing or two about a changing climate and what extreme weather can do. A fifth-generation farmer in Iowa, he has witnessed repeated floods, droughts and record-breaking, crop-damaging weather that has played havoc with agriculture in his state in recent years, starting with a 500-year flood along the Missouri River in 2008 and extending to the historical crop-killing 2012 drought that burned through thousands of acres. This year, record snow and rain hit his state in May, followed by the driest month of August on record. All of this adds up to massive losses in the fields — losses that will continue to mount as climate change feeds off billions of tons of greenhouse gasses spewed into the global atmosphere every year. Here's how he described the situation in Iowa:

"In Iowa we had nearly 800,000 acres of prevented planting because of flooding. And in many places around the state, they are looking at about a third of a crop of soybeans because of the drought. And some of these fields, unplanted because of flooding and burned up from drought are sitting right next to each other. Climate change is real, it's happening, it's going to get worse, and it's already causing great harm to farms like mine. … I speak for a lot of American farmers when I say let's stop wasting our time debating the existence of climate change. We need to use our time and money to find ways to protect the climate we depend on."

Stefanie Kravitz lives in Long Beach, N.Y., a barrier island south of Long Island. Her home was flooded during Hurricane Irene in 2011, so when Superstorm Sandy roared toward her vulnerable seaside community last October, she and her husband evacuated. But she had no idea it was going to turn out to be one of the most destructive storms in history. Boats and cars were tossed around like toys, roofs were torn off houses and glass shattered everywhere; out of 9,500 houses in town, she said about 25 percent were still vacant a year later. Kravitz's home flooded and 10 homes nearby caught fire. She said many of the people in town are still traumatized by the destruction of Sandy, a storm many are fearful could happen again.

"I always knew about climate change, but you do not really take it seriously until it happens to you. People need to understand that climate change is not a cliché, but a reality that is causing damage and destruction around the world and we need to change the way we live to prevent future damage to our country."

Hugh Fitzsimons is a third-generation rancher in Dimmitt County, Texas, where he raises bison and honeybees. But he's now fighting a battle on two fronts: a punishing drought brought on by a changing climate, and a new threat to groundwater supplies — hydraulic fracking — that has recently invaded his state and is sucking water out of valuable aquifers to feed its growing oil and gas operations. A record drought beginning in 2011 put a stranglehold on water supplies in his area, and Fitzsimons estimates that groundwater supplies are being depleted by an astounding one-third every year.

Meanwhile, he says the devastating drought is killing the flora that sustains his honeybees and making it difficult for even the toughest bison to survive. Last year, the Texas rancher says he had only seven baby bison calves when normally he has 10 times that many; his honey crop plummeted from 75 barrels to two.

"In short we have a new man-made water crisis etched atop the man-made crisis of climate change that produced the crisis…we're running on empty."

Emily Dondero lives in Sonora, Calif., and witnessed the Great Rim fire that has devastated the Sierra Nevadas and part of Yosemite Park. The massive fire — the third biggest in state history — has burned more than 400 square miles, threatening water supplies as far away as San Francisco and creating huge plumes of smoke that have drifted across state boundaries. The fire has destroyed areas of the forest cherished by her family and cost over $100 million to fight and contain. But it's the long-term costs that worry Dondero, as she says fires in her area are getting bigger and more dangerous. That, she says, is all the more reason to invest in new forest-management practices to protect future generations for the even larger fires to come.

"The Rim Fire illustrates the severity of fires that scientific experts anticipate will become more common as a result of climate change. Experts say this is just a foretaste of major fires to come, across the United States, as altered forest ecology due to hotter and dryer conditions result in larger, more destructive, and more intense fires."

Reverend Tyronne Edwards grew up in Plaquemines Parish, a flood-prone region at the southern tip of Louisiana that has some of the fastest land-loss rates in the world. Rev. Edwards founded the Zion Traveler Cooperative Center, which he organized in the aftermath of Hurricanes Katrina and Rita to help rebuild his hurricane-damaged community. Now, he is deeply involved in coastal restoration and learning more about the costs associated with a warming world and rising seas. Rev. Edwards told the committee that climate change is a critical threat in his community, a growing menace that needs to be addressed.

"Climate change is non-partisan, it's not based race, it's not based on religious affiliation political party or sexual orientation, it is a cause that all human beings must be involved in now. It would be a shameful commentary on all of our history if we didn't do anything if we were in a position to do something. It's time now that the whole beloved community get involved in climate change so the human beings and generations [ahead of] us have a safer place to live in."

These are wise words from voices on the front lines of climate change, words that every politician needs to hear and act on now.

Kistner's most recent Op-Ed was "Arkansans Still Suffering Effects from Seeping Oil Months After Mayflower Spill." The views expressed are those of the author and do not necessarily reflect the views of the publisher. This article was originally published on LiveScience.