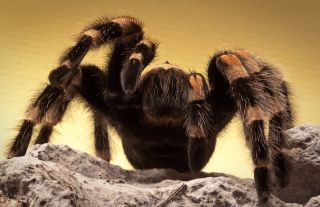 This is not the world
(Image: © Ioannis Pantzi, Shutterstock)

As the world’s largest spiders, tarantulas are both feared and beloved. There are more than 850 species of these often hairy, nocturnal arachnids. Tarantulas live primarily in the tropical, subtropical, and desert areas of the world, with the majority found in South America.

In the United States, tarantulas are found in southwestern states. Despite their fearsome appearance, tarantulas are not threatening to humans. Their venom is milder than a honeybee, according to National Geographic, and though painful, their bites are not harmful. In fact, tarantulas have become a popular pet for arachnophiles around the world.

According to the National Wildlife Federation, female tarantulas can live up to 30 years, while males live for a much shorter time, around seven years.

Tarantulas’ size and coloring can vary wildly depending on location and species. From front right leg to rear left leg, tarantulas range from 4.5 to 11 inches (11.4 to 28 centimeters) in length. They weigh from 1 to 3 ounces (28.3 to 85 grams) and have strong jaws and fangs. “The position of the fangs is distinctive as they are parallel to each other and face downwards like a vampire’s,” said Jo-Anne Nina Sewlal, an arachnologist at the University of the West Indies in Trinidad. While many tarantulas are dull brown or black, some species are brilliantly colored or striped.

“Probably [tarantulas’] most distinctive physical characteristic is that they possess very hairy legs and bodies,” said Sewlal. She explained that some species use these bristly hairs, called urticating hairs, as a defense mechanism. If the attacker makes physical contact with the spiders, the hairs can be “rubbed off on . . . [or,] flicked toward potential attackers. These hairs are quite irritating if they land on the eyes or mucus membranes.”

Tarantulas periodically molt, shedding their exoskeletons to grow. According to the Saskatchewan Science Centre, while tarantulas are molting, they can also replace internal organs — including female genitalia or stomach lining. They can even regrow lost legs or pedipalps (short sensory appendages).

Tarantulas are by no means tiny, but Sewlal noted that if they are threatened, they will raise their front two pairs of legs in the air. “This gives the impression that they are larger than they really are.”

According to Texas Parks and Wildlife Magazine, most terrestrial species of tarantulas are burrowers. Unlike many spider species, tarantulas do not use webs to catch their prey. They do, however, spin silk. If a tarantula lives in a place with dry soil, it will burrow into the ground and line the walls of the hole with silk to help keep sand and dirt out. If a tarantula does not burrow, it might spin a burrow out of silk, or live under a log or rock. Sometimes, tarantulas spin a line of silk near the entrance to a burrow, which, reports National Geographic, acts as a trip wire, alerting the spider to prey that is nearing its home.

According to the San Diego Zoo, when prey comes close, tarantulas ambush it, seize it with their legs, paralyze it with venom, and then kill it with their fangs. They can also crush prey with their strong jaws. After the prey is dead, tarantulas inject digestive enzymes into the prey to liquefy the body and suck it up through their straw-like mouths.

Sewlal described tarantulas’ distinctive mating ritual. Before he can mate, the male spins a “small special web” and sprays it with sperm. Afterward, he rubs himself on the web, loading his pedipalps with it. He then searches for a female’s burrow, using the pheromones she gives off as a guide. According to the National Parks Service, when a male tarantula finds a female burrow, he “taps his foot to alert the female to his presence.”

If she is receptive, she will emerge from her burrow, and the male will begin a series of courtship displays, including lowering the front of his body, raising his abdomen, shaking his pedipalps, and moving back and forth, according to Sewlal. If she is not interested, Sewlal said, she will either “attack him or pay no attention to him.”

He then mates with the female, holding her fangs back with his legs. When he’s finished, he “makes a quick getaway since females will often try to eat the males after mating,” said Sewlal.

According to the Integrated Taxonomic Information System (ITIS), the taxonomy of tarantulas is:

Some notable species of tarantula are:

Chilean Rose Hair (Grammostola rosea): Often called “Rosie” by arachnid-enthusiasts, these Chilean spiders are a rich brown color with pink-tinged hairs. There are, however, other color forms; according to the University of Calgary, they can also be gray or reddish copper. They grow to be about 5.75 inches long, according to the Woodland Park Zoo.

Cobalt Blue (Haplopelma lividum): Under certain lights, these Southeast Asian tarantulas are a bright, brilliant blue. Otherwise, according to the Oakland Zoo, they look black. They are among the most aggressive types of tarantula, and also one of the most rare.

Pink Toe (Avicularia avicularia): These smallish Caribbean tarantulas start life with pinkish bodies and dark-colored feet. As they age, they “undergo a reversal in their coloration,” as the Jacksonville Zoo and Gardens puts it. Mature pink toes have dark-colored bodies and pinkish feet—hence their common name.

Goliath Bird-Eating (Theraphosa blondi): A real giant, this behemoth has a leg span of nearly 12 inches (30 cm), according to Blue Planet Biomes. It is native to Northern areas of South America and lives in swamps. True to its name, this tarantula can eat birds, though the behavior is rare. Sewlal said, “In addition to insects, the primary prey of this species is actually earthworms. However, due to its size it is capable and it does kill and consume small vertebrates such as, frogs, snakes, lizards and even bats and rodents . . . and occasionally young birds. But birds do not comprise their main diet.”

Interestingly, tarantulas have been described as bird-eaters for centuries. Sewlal said that this can most likely be traced from “a copper engraving from the 18th century by German artist Maria Sibylla Merian, which depicts a ‘tarantula’ eating a hummingbird.”

Tiger spider (Poecilotheria rajaei): This newly discovered species has a leg span of 8 inches (20 cm), according to Wired magazine, and enough venom to kill mice, lizards, small birds and snakes. It was discovered on the island nation of Sri Lanka.