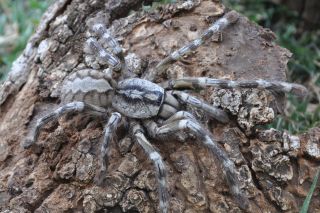 It's big, it's hairy, and it's venomous.

The newest spider to give arachnophobes the willies, a tarantula named Poecilotheria rajaei has been discovered on the island nation of Sri Lanka.

With a leg span of 8 inches (20 centimeters) and enough venom to kill mice, lizards, small birds and snakes, according to Sky News, the crawler is covered in subtle markings of gray, pink and daffodil yellow.

"It can be quite attractive, unless spiders freak you out," Peter Kirk, editor of the British Tarantula Society journal, told the New York Daily News.

Even the scientists studying the spiders admit to being a little freaked out by its size: "It was slightly smaller than the size of the plate we have dinner on," Ranil Nanayakkara, co-founder of Sri Lanka’s Biodiversity Education and Research, told the Daily News.

Tarantulas have been the subject of considerable study lately: Researchers are still trying to determine how or if tarantulas use silk from the spigots on their feet. And in 2012, a scientist reported discovering nine species of colorful Amazonian tarantulas in Brazil.

The newest tarantula, as part of the Poecilotheria genus of arachnids (sometimes called "Pokies" or tiger spiders), is a tree-dwelling spider. All the Pokies, known for being colorful, fast and venomous, are found only in India and Sri Lanka, Wired reports. [Photos: The World's Creepiest Spiders]

"They are quite rare," Nanayakkara told Wired. "They prefer well-established old trees, but due to deforestation the number have dwindled, and due to lack of suitable habitat they enter old buildings."

The spider was first seen in 2009 after the discovery of a dead male specimen, on which scientists noticed a unique pink abdominal band.

"In order to establish if this really was a new species to Sri Lanka and to the world, the authors carried out intensive and extensive surveys in the northern part of Sri Lanka to establish the distribution and ecology of this new species," the scientists write in the British Tarantula Society journal.

"But what was lacking was a female or any other specimen of the same type. Days of extensive searching in every tree hole and bark peel were rewarded with a female and to our satisfaction several juveniles too."

It's not yet known exactly how rare the newly discovered tarantula is, but there's some concern that habitat destruction is causing their number to dwindle. Additionally, northern Sri Lanka, where the spider was found, has been wracked by political violence in recent years.

"It demonstrates that wildlife continues to survive whilst we are in the throes of conflict and that they can adapt to its changing environment," Kirk told Sky News, "but … we risk destroying the habitats of species new to science and condemning them to extinction before they are even discovered."