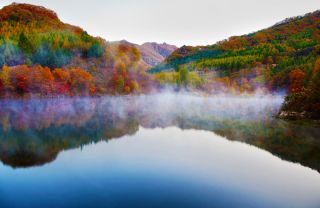 This serene shot shows fog drifting over a remote pond's surface, with the vivid colors of the surrounding hills reflecting in its waters.
(Image: © huyangshu | shutterstock)

Every year, New England and other northern regions reliably burst into a blaze of fall color. But this natural phenomenon will likely become less reliable as climate change disrupts the planet, experts say. Add those brilliant reds and oranges to the list of global warming victims.

It's also a beloved time of year, said Carolann Ouellette, director of the Maine Office of Tourism. "For many people, it means so many things," Ouellette said. "It's a very energizing time for Maine and for our visitors." [Turning Leaves: The Rich Colors of Fall Foliage]

And the shrinking of a seasonal tradition could stand as another climate warning, a (dull-colored) "canary in the coal mine," Neufeld said. "A tree stressed is a symptom that something larger is wrong with our world," Neufeld wrote on his blog.

Several studies have shown that fall color, on average, arrives later these days — and that delay correlates with warming temperatures.

A 23-year observational study at Harvard Forest has shown that fall hues now arrive three to five days later today, on average, than they did at the beginning of the study. That correlates with an increase of about 2 degrees Fahrenheit (1.1 degrees Celsius) in average temperatures in the Northeast, said John O'Keefe, an emeritus professor at Harvard who collected the data.

"Should that pattern continue, by the middle of the century, we'd be at well over a week later" for fall color, O'Keefe said.

Trees cue in on both day length and temperature when moving toward leaf "senescence," the process that produces fall color. Warmer fall days will make trees delay this process, Neufeld said. "The trees say, 'It's not getting colder, so I'll just keep my leaves,'" he said.

All else being equal, however, a later fall start might not do much harm to the leaf-peeping season, as global warming could also delay the frost and push off the end of fall, O'Keefe said.

Unfortunately, "all else" is not equal, and studies like O'Keefe's fail to account for the ways climate change might rob New England of its red leaves, Neufeld said.

For one thing, climate change will likely alter the "suitable habitat" for many of the trees that bring fall color, particularly New England's prized sugar maples, "one of the most important contributors to fall foliage," O'Keefe said.

Simulations show that climate change will push sugar maples from New England into Canada, reducing the suitable habitat for these trees in the United States by 40 to 60 percent by 2100, said Louis Iverson, a landscape ecologist with the U.S. Forest Service, whose "Climate Change Tree Atlas" forecasted the shift.

Though trees that currently populate more Southern states might move in to fill that space, few, if any, can replicate the sugar maple's brilliant red hues, Iverson said. "Certainly, there are some ashes that turn brownish," he said. "I don't think there's anything that can replace the sugar maple."

Moreover, those Southern trees still may not thrive in the Northeast, Neufeld said. "There might not be the right soil, even if the climate is right," he said.

Because it actually takes energy and nutrients to produce the red colors of fall, several other climate-related changes could dim autumn forests, Neufeld said.

Yellow colors are always present in the leaves, and simply become visible when the masking green of photosynthesis disappears. By contrast, trees actually manufacture their red pigment, or anthocyanin, in the autumn. (Orange colors arise through the interplay between red and yellow pigments.)

Under current conditions, the fall signals of cool nights and sunny days prompt trees to temporarily store nutrients in their leaves in the form of red pigments. But if climate change pairs hotter nights with those shorter days, "trees may [instead] burn off their sugar, or send it to the twigs," Neufeld said. That means, the trees won't use that sugar to make red pigments. [See Where Fall Leaves Are Turning]

Invasives and other effects

A warming planet could have a host of other effects on fall foliage, too, he said. More frequent and more intense droughts, predicted by climate change models, will convince trees to simply drop their leaves before they have a chance to change hues, he said.

Some of the effects of climate change on fall color may take awhile to become apparent. Older sugar maples, which can live 400 years, may still hang on in less-than-ideal conditions, Iverson said.

However, if and when catastrophes such as fires, hurricanes — or invasive species — wipe out large sections of trees, the new, warmer conditions will prevent their replacement, Iverson said.