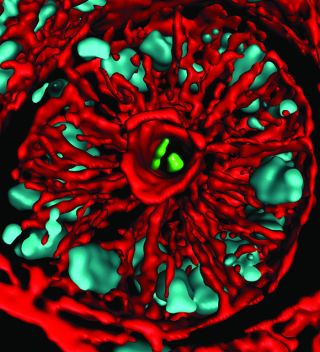 Our bodies are teeming with hundreds of distinct kinds of microbes, such as fungi, viruses and bacteria. Early work in understanding our resident microorganisms (microbiota) focused on identifying the many species by mass-sequencing their genomes (metagenomics). Now, attention has turned to understanding exactly how the microbial populations function, thrive and, most importantly, contribute to our health.

As they do with many types of complex biological systems, scientists investigating our microbiota use model organisms. Creatures like fruit flies, zebrafish and mice not only have many genes in common with us and function in biologically similar ways, they also harbor microbes analogous to ours.

Examples abound. Among the most recent is a new understanding of how a genus of bacteria called Bacteriodes, which is abundantly represented in our microbiota, stake claim in the gut. Sarkis Mazmanian of the California Institute of Technology (Caltech) and his colleagues introduced different species of Bacteriodes into germ-free mice to learn how the microbes competed in the gastrointestinal tract. Most co-existed peacefully. But when microbes of a species that was already present were introduced, they couldn't take up residence.

Further investigation revealed that due to a set of specific genes, Bacteroides species can live in tiny pockets or "crypts" of the colon, where they are sheltered from antibiotics and infectious microbes passing through. The findings help explain how the bacteria establish and maintain long-term colonization and raise new questions about Bacteroides' interactions with other microbes as well as with the host's tissues.

Other fundamental microbiota questions being examined by scientists are: How have microbial genes influenced ours? What enables often-harmless microbes like E. coli to turn deadly? How can microbial communication and products influence our biology?

"These are all very difficult questions to address because of the complexity of our microbiota," says NIH's Darren Sledjeski. There are also practical research problems, he added, such as creating standards for collecting, managing and analyzing microbiota data.

Scientists are making inroads in explaining the ways in which gut microbes alter the effectiveness of certain medicines, influence our immunity and metabolism, and even affect our mood. Their findings suggest that modulating the microbial communities within us — perhaps as simply as through dietary modifications — could potentially address a wide range of conditions, including inflammatory diseases, obesity and anxiety.

Both Reddy and Sledjeski caution that before potential health applications can be developed, tested and approved for human use, more research is needed on the intricacies of microbe-host dynamics.

The Caltech research reported in this article was funded in part under NIH grants R01GM099535 and R01DK078938.

Bacteria on Your Body Activity