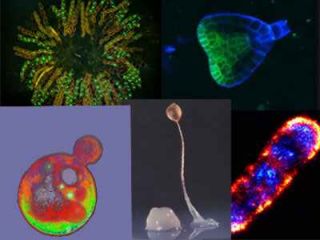 How does genetic inheritance occur? How do cells grow and divide? How do our brains work? What drives eating, sleeping, aggression and other human behaviors?

Because the basic operating principles are nearly the same in all living things, studies involving model organisms — microbes, fungi, plants and animals — can teach us about biological processes in people and give us insight into these fundamental questions. From amoebas to zebrafish, research using model organisms — much of it funded by the National Institutes of Health — continues to lead to new ways to maintain health and diagnose and treat disease.

Below, meet five of science's most popular model organisms.

E. coli is notorious for its link to tainted beef and other foods. But for scientists, E. coli is a key model organism that has helped uncover many of the cell's fundamental processes. Scientists have sequenced E. coli genomes to understand genetic differences between beneficial and harmful bacteria. Other studies focus on metabolism and gene expression, potentially uncovering new ways to treat bacterial infections and human disease.

Though we may not appear to have much in common with a slime mold, scientists have discovered that many of its genes are close copies of our own. Because of its unusual properties and ability to live alone or in a group, the slime mold intrigues researchers who study cell division, movement and various aspects of organ and tissue development.

There's a reason people joke about using moldy bread as a science experiment. Thousands of researchers study the common mold Neurospora to answer questions about how species arise and adapt as well as how cells and tissues change their shape in different environments. Since Neurospora produces spores on a 24-hour cycle, it's also useful for understanding biological clocks.

The same yeast used by bakers and brewers has been an indispensable tool for scientists. A fungus (not a plant, not an animal, but related to both) and a eukaryote (a "higher" organism with an organized, protective nucleus that holds its chromosomes), yeast has endeared itself to researchers in part because it grows fast and its genes are easy to work with. Because of that ease, experiments with yeast have taught us about how mammalian genes work and what happens when they don't work, clarified how genes are turned on or off and explained how cells that contain the same genes can be so different from one another. Yeast studies also helped scientists sort out the orderly sequence of events in which a cell divides. That information has benefited millions of people, since many cancer drugs interfere with the same cell cycle.

A small flowering plant related to cabbage and mustard, Arabidopsis — the most popular model for studying plant genetics — is appealing to biologists because ithas almost all of the same genes as other flowering plants and has relatively little DNA that doesn't encode for proteins. It also grows quickly, going from seed to mature plant in only 6 weeks. Because plant cells and cell parts communicate with each other in much the same way that human cells do, Arabidopsis and other plants make good models for genetic diseases that affect cell communication, such as cystic fibrosis, Huntington's disease and Fragile X syndrome.