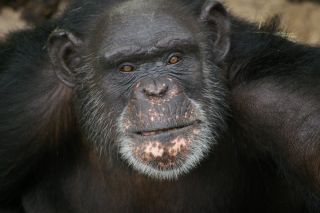 Brent is a chimpanzee who lives at Chimp Haven in Keithville, La. Brent is 37 years old and has lived at Chimp Haven since 2006. He is protective of Grandma, Chimp Haven's oldest resident. He loves to laugh and play. Brent paints only with his tongue. His unique approach and style, while a little unorthodox, results in beautiful pieces of art.
(Image: © Chimp Haven.)

An unusual painting technique, even among chimpanzees, has won the popular vote; Brent, a 37-year-old male chimpanzee, paints only with his tongue. His piece, a cluster of smudges and speckles, garnered the most votes in a chimpanzee art contest, the Humane Society of the United States (HSUS) announced Thursday (Aug. 29).

The judge's selection, made by primatologist Jane Goodall, went to Cheetah, a former laboratory chimpanzee, who used an autumnal palette dominated by yellow, orange and red.

The HSUS intended the competition to draw attention to chimpanzees' abilities as well as the importance of sanctuaries in caring for chimpanzees once used in research, the entertainment industry or the pet trade. As the first-place winner in the public voting, Brent has earned a $10,000 grant for his sanctuary, Chimp Haven in Louisiana. Cheetah, who took second place in the popular vote in addition to the judged prize, garnered two $5,000 awards for his sanctuary, Save the Chimps in Florida. The third-place winner and the other three contestants will also receive smaller awards, according to a statement by HSUS.

Goodall made her selection based only on photos of the paintings.

"It was difficult to choose," she said in a statement. "It's so important that the public support all of these sanctuaries in their mission to provide exceptional care to chimpanzees and other primates who have suffered through so much."

The ways in which chimpanzees are used, particularly in biomedical research, in the United States are changing. A proposal by the federal government, announced in June, would give captive chimpanzees protection under the Endangered Species Act. (Wild chimpanzees are already protected.) If finalized, this change could interfere with the interstate trade involving chimpanzees, and require permits that would sharply limit the animals' use in medical research.

The federal government has already curtailed invasive biomedical research on chimpanzees. The National Institutes of Health (NIH) adopted new guidelinesin December 2011 for use of the animals in studies. Also in June of this year, the NIH began the process of permanently retiring most, but not all, of its research chimpanzees and moving them to sanctuaries.

Francis Collins, NIH director, pointed out the paradox of conducting research on chimpanzees in a 2011 statement. Because they resemble humans so closely, chimpanzees make ideal subjects for medical study, but that same similarity raises questions about their use. "Chimpanzees are our closest relatives in the animal kingdom, providing exceptional insights into human biology, and the need for special consideration and respect," Collins said.

The contestants came from six member-institutions of the North American Primate Sanctuary Alliance. The chimpanzees' paintings will be auctioned on eBay later this year, with proceeds benefiting the Alliance, HSUS said in a statement.