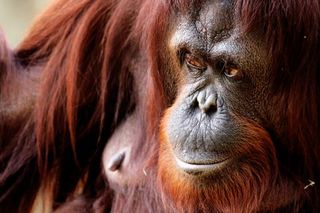 A team of scientists is arguing that orangutans and not chimps are humans' closest animal relatives.
(Image: © Dreamstime.)

Everybody knows that humans' closest animal relatives are chimpanzees.

At least, that's been the accepted wisdom among scientists for more than 30 years. But now two biologists are arguing that orangutans, not chimps, are our closest cousins.

The chimp-human connection was established with DNA: Our two species' genomes differ by only a few percentage points, while the spread between human and orangutan DNA is a bit wider.

But physical, behavioral and fossil data points to a greater similarity between humans and orangs, says Jeffrey Schwartz, an anthropologist at the University of Pittsburgh, and John Grehan, director of science at the Buffalo Museum of Science. They list features such as thick tooth enamel, beards on males, the way we smile, and similar-shaped shoulder blades as characteristics that humans and orangutans share.

This argument does not sit well with many experts in the field.

"The DNA evidence is so strongly against it," said Frans de Waal, director of the Living Links Center at the Yerkes National Primate Research Center of Emory University in Atlanta. "It's a leftover from the days that bones ruled, but they don’t anymore."

Many experts trust the genetic data because they say the physical similarities can be subjective. It's hard to tell whether two species independently evolved similar features, or actually descended from a common ancestor with those features.

"Many of these characteristics, we have no clue if they're literally the same traits in evolutionary terms," said Todd Disotell, an anthropologist at the Center for the Study of Human Origins at New York University. "It's hard to say they are due to shared common ancestry. We’ve tied almost no physical traits yet down to their underlying genetic causes."

The DNA data is more concrete, he said. The sequences of molecules composing genes can either be the same or different.

But Schwartz and Grehan don't agree that the DNA evidence is that airtight.

"Most of the comparisons that suggest that humans and chimps are so closely related are actually only looking at a region of two to three percent of the entire genome," Schwartz said.

Much of the rest of the genome is the non-coding region, where the sequence of molecules is less important because the genes are put together out of order, he said.

Malte Ebach, a researcher at Arizona State University's International Institute for Species Exploration, finds some strength in the orang-human claim by Schwartz and Grehan.

"They criticize molecular data where criticism is due," said Ebach, who was not involved in the new study. "Palaeoanthropology is based solely on morphology, and there is no scientific justification to favor DNA over morphological data. Yet the human-chimp relationship, generated by molecular data, has been accepted without any scrutiny."

The pro- and con-DNA factions may never see eye to eye.

"Jeffrey has been claiming this for many years now in the face of increasingly insurmountable evidence to the contrary," said David Smith, an anthropologist at the University of California, Davis. "My own expertise is molecular, and I can assure you that there is not a shred of genetic evidence in support of his argument."

Schwartz first proposed a similar idea in 1982, and has been enduring backlash ever since. The recent study with Grehan, published in the June 18 edition of the Journal of Biogeography, adds some new data and analysis to the argument.

"All this is really asking people to criticize the assumptions that underlie their work and to not be afraid of entertaining alternative interpretations," Schwartz said in a phone interview. "I don’t think that any one biological element — DNA or anything else — is necessarily always going to give you a correct result. There are lots of cases I think that could be benefited by being revisited."

If the approach favored by Schwartz and Grehan is right, it's not just humans' relationship to chimps, but all purely molecular research establishing evolutionary relationships throughout the tree of life that would have to be revised, some say.

In other words, if the DNA evidence that many biologists use as evidence turned out not to accurately reveal evolutionary relationships, the work of many molecular biologists would be suspect.

"If this was true, we would lose entire departments at major universities," Disotell said. "I would have nothing to do. I would go become a carpenter."