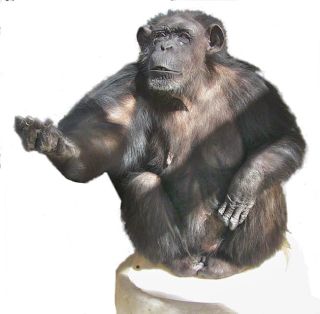 Scientists keep finding more similarities between humans and chimps. They share most of our genes, they seem to be able to handle tools, and they grasp some English pretty well, too.

Now researchers have found that we share a similar brain pattern when communicating.

Broca’s area, located in the part of the human brain known as the inferior frontal gyrus, has been shown to be critical for human speech and sign language. When a person speaks, or even plans to say something, this region lights up with activity.

"This is the first time someone has measured activity in that area in chimp brains," said Jared Taglialatela, a biologist at the Yerkes National Primate Research Center in Atlanta. "It looks like a similarity between humans and chimps."

Taglialatela and his colleagues used a PET scan to image activity in the brains of three chimps after doing two tasks. In one, the chimps asked for food by gesturing and vocalizing — making grunts and other noises. In another they passed rocks out of their cages in exchange for food, as they had been taught to do before.

The scientists found that Broca's area was activated in the chimps' brains after making gestures and vocalizing, but not after the rock task, signaling that this brain region is particularly tied to communication.

The finding, reported online Feb. 28 in the journal Current Biology, narrows the gap between humans and chimpanzees a little bit more.

"If we really want to talk about the big differences between humans and chimps — they're covered in hair and we're not," Taglialatela told LiveScience. "Their brains are about one-third the size of humans'. But the major differences come down to ones of degree, not of kind."

He said we share many profound likenesses with our closest animal relations. They have been shown to possess remarkable language capacities, to have the ability to make and use tools and even to learn behaviors from other members of their community — all traits once thought to be the hallmarks of humanity.

Chimps have been trained to use computer touch screens to communicate with humans and can understand many words of spoken English.

They can also solve basic puzzles, sequence numbers in order, and, in one surprising study, beat college students on tests of short-term memory.

We even share most of our DNA. Reportedly, the human and chimpanzee genomes differ by only 1.5 to 5 percent.

So what does separate us from apes?

"I would really stress that the differences are just a matter of degree," Taglialatela said. "There's some fairly good work with regards to chimps making and using tools in the wild, but of course it doesn't really compare to operating an MRI scanner."

The same goes for language, he said.

"Their English comprehension has been shown to be very sophisticated, but they could never have a conversation like we're having right now," he said. "And recursiveness — the ability to talk about language — is something I think is beyond the ability of chimpanzees."

Taglialatela also said chimps do not have the self-control humans do. Where people often censor their words and actions to fit a social situation, chimps generally act on impulse. If they are hungry, they will ask for food; if they are angry at another chimp, they might take a swat at him.

"They're not furry little humans, is what it comes down to," he said. "But nonetheless, they're not so different."