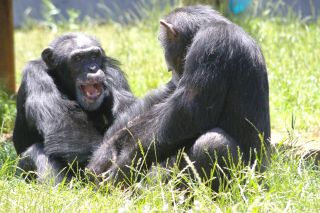 Chimpanzees at Chimp Haven, a national chimpanzee sanctuary in Louisiana, grooming and playing with one another.
(Image: © Chimp Haven)

Plans announced this week by the National Institutes of Health (NIH) to retire most of its 360 research chimpanzees introduces the question of where these chimps will go. The answer has yet to be determined.

Regardless, the plan promises to offer more autonomy to these intelligent animals.

This monumental decision to end NIH-funded chimpanzee research was made in response to a 2011 Institute of Medicine report assessing the necessity of continuing to subject human's closest living relative to the regimented lifestyle of experimental study. [Grooming Gallery: See Images of Social Chimps]

"Americans have benefited greatly from the chimpanzees' service to biomedical research, but new scientific methods and technologies have rendered their use in research largely unnecessary," NIH Director Francis Collins said in a statement. "Their likeness to humans has made them uniquely valuable for certain types of research, but also demands greater justification for their use."

The decision comes on the heels of a proposal this month by the U.S. government to list such captive chimpanzees as endangered, bringing their threatened status (which carries fewer protections) to a higher level, matching that of wild chimpanzees.

The NIH expects to send some of the retired chimps to a national chimpanzee sanctuary in Louisiana, called Chimp Haven, which currently houses 166 chimps. Although Chimp Haven doesn't currently have the capacity to house all of the new retirees, sanctuary officials are in the process of expanding the facility to eventually house up to 425 chimps, according to head veterinarian Raven Jackson.

The transition from a structured research lifestyle to a more spacious and social sanctuary existence may seem like a potentially jarring experience, but most chimps appear to adjust well to this type of change.

"The chimpanzees that we receive at Chimp Haven adjust extremely well," said Frans de Waal, a primatologist at Emory University in Atlanta and a member of the Chimp Haven board of directors. "It is remarkable; after a life often in small cases, they take so well to an open environment and life in groups."

The adjustment takes longer for some than others, but most seem to acclimate within the first several months in residence, Jackson said.

A chance to be social

For many of these chimps, this is the first opportunity to socialize with wild-born chimps — interaction that helps retirees navigate the foreign landscape.

"A chimp born in a research center may [have] never climbed a tree before. They will learn to climb a tree," said Jackson. "At no point will they be forced to be inside. They can say, 'I want to sleep outside amongst the trees and the breeze.' They are given that free choice."

Current space limitations at Chimp Haven and other sanctuaries across the country will likely require some primate research centers to hold onto their chimps.

"We will continue to provide the best care for the chimpanzees," said Lisa Newbern, a spokeswoman for Emory University's Yerkes National Primate Research Center. "Components of our behavioral-management program include socialization, enrichment — feeding, physical and sensory — and training. All of this daily care happens now, so the routine for the animals will continue as it does now."

The NIH is working with Congress to begin shifting funds from chimpanzee research toward sanctuaries to help accommodate this transition, the NIH reported during a call-in news conference on June 26.