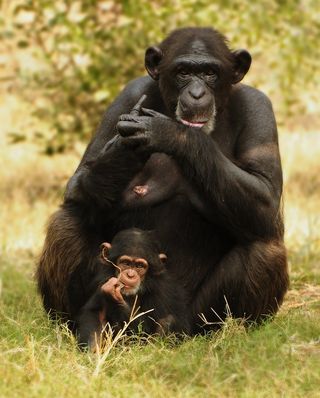 A chimpanzee mother with her baby.
(Image: © neelsky, Shutterstock)

A majority of the chimpanzees used for research by the U.S. National Institutes of Health (NIH) should be retired, a government panel concluded this week.

The report issued by a working group within the NIH's Council of Councils said a small population of 50 chimpanzees should be kept for future research, while planning should start immediately to put retired apes in sanctuaries.

The panel had been tasked to advise the NIH on what to do with the agency's 360 chimpanzees that aren't retired and still live at research facilities after the Institute of Medicine (IOM) issued a report over a year ago concluding that most biomedical research on the primates was not necessary.

Officials at Chimp Haven, a sanctuary outside Shreveport, La., that's likely to take on many of the retirees, applauded the move.

"We look forward to working closely with the NIH to devise a strategy to retire these chimpanzees to Chimp Haven," Jennifer Whitaker, vice president of the organization said in a statement.