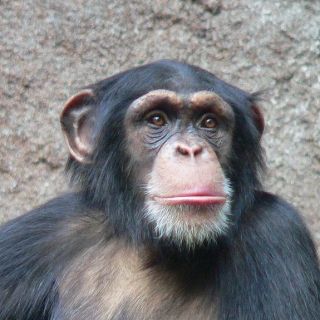 For the first time, criteria have been issued on research using our closest relatives in the animal kingdom, chimpanzees.
(Image: © By Thomas Lersch [GFDL (www.gnu.org/copyleft/fdl.html) or CC-BY-SA-3.0 (www.creativecommons.org/licenses/by-sa/3.0/)], via Wikimedia Commons)

Guidelines now govern the use of our closest living relatives, chimpanzees, in federally funded U.S. research, and because of them, some biomedical studies are likely to come to an end.

In fact, nearly all research using chimpanzees to develop drugs or answer other questions with medical applications for humans should end, according to a committee charged with establishing the first set of criteria for research on chimpanzees. The committee released its report Thursday (Dec. 15).

Research into genetic or behavioral questions — such as looking for insight into human behavior by studying how chimpanzees help one another out, or searching for the genetic underpinnings of language — are acceptable, or could become so with only minor modifications, according the committee convened by the National Academy of Sciences.

These types of projects are typically less invasive than biomedical research, which could involve, for instance, infecting chimpanzees with a virus.

For example, in behavioral research, chimpanzees — which, like humans, are social — must live with others, and may not be anesthetized by being shot with a dart. However, chimpanzees can be trained to offer their arms to have blood drawn or accept anesthesia so they can be examined, according to the committee. [Chimps vs. Humans: How Different Are We?]

The criteria for both types of research are based upon three general guidelines: The knowledge gained by the research must be necessary to advance public health; the research cannot ethically be done on a human being, or is not possible on another animal or in something that is not a living organism; and the chimpanzees used in the research must be given appropriate places to live.

In practice, this means the National Institutes of Health (NIH) will not award any new grants for research until an assessment process is in place, and a project-by-project review will be conducted to determine if ongoing research fits the criteria, said NIH Director Francis Collins, who accepted the committee's recommendations.

"Chimpanzees are our closest relatives in the animal kingdom, providing exceptional insights into human biology, and the need for special consideration and respect," Collins said in a statement on Thursday.

He estimated that about 37 research projects might be affected, and that, of these, about half may not be continued.

These criteria will only apply to research projects that receive some kind of NIH support, including animals used by private groups but housed using federal money, according to committee member Warner Greene, a virologist at the University of California, San Francisco.

Although the committee did not review projects, it did provide two examples of biomedical research that met its criteria to continue, at least temporarily.

Research using chimps to study monoclonal antibodies was given a temporary reprieve to avoid substantially slowing research. Monoclonal antibodies are similar to the regular antibodies your immune system produces, but they are designed to target specific molecules. They are used to treat a variety of conditions, including cancer and autoimmune disorders.

The committee's 10 members were also split on whether a vaccine intended to prevent or minimize hepatitis C infection would require safety testing on chimpanzees.

Even though the committee did leave the door open to future testing on chimpanzees, biomedical research on chimpanzees is on its way out, said Andrew Rowan, chief scientific officer of the Humane Society of the United States.

The use of cell cultures — when cells are grown without an organism — allows researchers to generate higher volumes of data under more easily controlled conditions and have replaced animals, including chimpanzees, in labs, Rowan said.

The future of research

Theodora Capaldo, president of the New England Anti-Vivisection Society/Release & Restitution for Chimpanzees, believes the new guidelines mean an end to all work with chimpanzees, including those typically considered less invasive, such as for instance, a behavioral study involving an MRI scan, since a chimpanzee would have to be anesthetized to accept being put into an MRI machine, unlike a human. (According to the committee, animals should acquiesce to research procedures.)

"If that criteria is scrupulously applied, it is an end to chimpanzee research. We do not believe there are any projects out there that can meet that criteria," Capaldo said.

Joseph Erwin, a primatologist who specializes in the care of captive primates and the neurobiology of aging, disagrees.

"If research is done in humane ways under good conditions with consideration for the animals, I don't see why anyone should be against it," said Erwin, who along with many others presented his perspective to the committee earlier in the year. "People who oppose all animal research seem not to be aware that scientific research can be done without harming or hurting animals. In fact, that is the only kind of study I find acceptable."

The committee reached "reasonable conclusions," Erwin told LiveScience, lauding the committee for focusing on the importance of housing the apes in appropriate environments.

Brian Hare, a primatologist who studies cognition, said the new guidelines would have no real effect on his field since the majority of this non-invasive research takes places at accredited zoos or African sanctuaries, where chimpanzees, and other great apes, live in more natural environments that promote both their psychological well-being and conservation.

"The burdensome financial and moral cost of large-scale chimpanzee labs was justified because of the promise that chimpanzee research would open doors to cures of dozens of diseases that were otherwise intractable. The report is clear that this large-scale approach is obsolete and is simply no longer necessary for advancing human health," Hare told LiveScience in an email.

Rowan agreed. "Chimpanzees deserve greater moral consideration than we are currently giving them. It is going to come to an end, the question now is when."