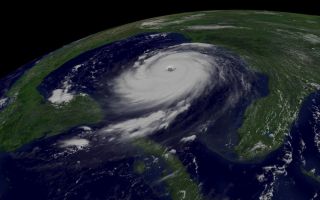 Predicting how strong a storm, whether a hurricane, tornado or thunderstorm will be is part science and part art — and it wouldn't be possible without sophisticated measurement and forecasting technology.

To create these forecasts, meteorologists combine observations from atmospheric sensors, weather balloons, radar, satellites and aircraft monitoring with complex computer models to predict when a storm will form, where it will strike and how severe it will be.

"You go to the doctor, you tell the doctor your symptoms and the doctor makes a diagnosis before he makes a prognosis," Carbin told LiveScience. "We need to diagnose the current state of the atmosphere as best we can before we can attempt to forecast." [Hurricanes from Above: See Nature's Biggest Storms]

The SPC is primarily concerned with forecasting thunderstorms and tornadoes in the continental United States. At the core of its work is climatology, the study of climates and how they change. A basic understanding of how weather works relies on the historical record, Carbin said.

"We have a pretty good understanding of the time of year when parts of the country are at the greatest risk," Carbin said. In the middle and southern United States, the greatest storm risk occurs in spring and early summer. At that time, warm, moist air left over from winter cyclones meets winds from the jet stream, creating high winds, tornadoes and dangerous hail, Carbin said.

With this knowledge in hand, forecasters can pay close attention to storm systems at this time of year. Storm prediction starts with measuring the current weather conditions, such as air temperature, air pressure and wind speed. Every airport in the country collects this information every five minutes, Carbin said.

All of the weather and satellite data is fed into numerical simulations run on supercomputers, which crunch the numbers and spit out a model of the atmosphere's behavior. Scientists compare that output with weather observations, and if it’s a good match, they use the model to make a forecast.

Once a storm is brewing, scientists begin monitoring it using radar. Radar energy is beamed off the precipitation inside clouds, and the strength of the reflected signal reveals the density of moisture, snow, hail or dust in the storm system. The frequency of the signal tells scientists whether the storm is moving toward the radar source or away from it.

If the storm is rotating, it could spawn a tornado. Because tornadoes are relatively small, localized features, meteorologists can't forecast them more than a few hours in advance.

Hurricanes, by contrast, are much larger, slower-moving weather systems that form over water, so forecasters have more lead time to predict when they might hit land.

NOAA's National Hurricane Center (NHC) in Miami uses a variety of tools for forecasting hurricanes. Some of the most important are the Geostationary Operational Environmental Satellites(GOES), which monitor the eastern and western portions of the United States and the bordering regions of the Atlantic and Pacific oceans. Hurricane forecasters use a method called the Dvorak technique with the satellite imagery to estimate the intensity of a tropical storm system. [Infographic: Storm Season! How, When & Where Hurricanes Form]

Once a developing hurricane comes within range of a coast, NOAA sends in a hurricane hunter aircraft. The aircraft flies straight into the storm to measure its parameters. "Think of a hurricane hunter as an 'MRI' for the storm," said NHC spokesman and meteorologist Dennis Feltgen. Inside the storm, the plane ejects an instrument called a dropsonde, which parachutes down and relays information about air temperature, humidity, and wind speed and direction; the instrument later degrades in the ocean.

The data gathered by the hurricane hunter goes into computer models run on computers like those used by the SPC meteorologists.

"We use a number of computer models. No single one is perfect," Feltgen told LiveScience. Forecasters integrate the model data with satellite data, aircraft data and their own experience. "A meteorologist is always looking for as much data as he or she can get," Feltgen said.

Forecasters use the data to categorize hurricanes on the Saffir-Simpson Hurricane Wind Scale, a 1 to 5 rating of sustained wind speed. The scale estimates potential property damage, from 1 ("Very dangerous winds will produce some damage") to 5 ("Catastrophic damage will occur").

But the greatest threat to life and property from hurricanes is often from storm surge — a rise in seawater due to a storm — which the Saffir-Simpson rating doesn't take into account. Hurricane evacuation zones are based not on wind, but on water, though there's no scale for storm surge, Feltgen said. [Storm Surge Video: Deadliest Part of Hurricane]

"Computer forecasts have come a long way," Feltgen said. But ultimately, emergency managers are the ones who use that information to make decisions about how to prepare for a storm, he said.