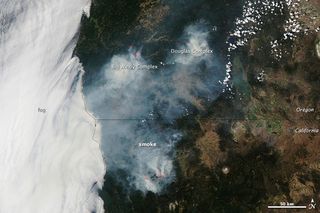 Though Alaska and California saw an early start to their annual wildfire seasons this year, with major burns flaring up in May, experts said today that fire activity has been average so far in 2013.

"If you go back over the last 30 or 40 years in the U.S., you see this strong increasing trend in the total amount of [acres] burning each year," said Doug Morton, a research scientist at NASA's Goddard Space Flight Center in Greenbelt, Md. "The early fires around Los Angeles in May were pretty unique, but 2013 is an average burn year," Morton told LiveScience. However, Morton added that the United States is just midway through its wildfire season.

Morton is one of many NASA scientists who track and predict fires around the planet using data collected from space. Today (Aug. 9), they hosted a Google+ hangout on the future of wildfires, also sharing information on NASA monitoring and prediction efforts for fire activity. In one of those efforts, Morton and his colleagues issue yearly predictions for wildfires in the Brazilian and Amazonian tropical rainforests and track smoke and other airborne particles as they travel on atmospheric currents.

But the researchers are also looking further ahead for the United States.

"The scale of the drought we saw in 2012 across the [Great] Plains and the far range of the Rockies was pretty extreme drought, one you might see only once in a decade," Morton said during the Google+ hangout today. "By the middle of the century, we're predicting to see years like that four or five times a decade. By the end of the century, it will be like that every year in the Front Range of the Colorado Rockies," he said. "It will be the new normal."

NASA has two different types of satellites to help track wildfires on a daily basis, Morton said. The agency can send text updates to fire managers within 30 minutes of obtaining a snapshot from a geostationary weather satellite, but the wildfires must be fairly large, he said. The polar-orbiting Terra and Aqua satellites provide more detailed views, as does the Suomi NPP satellite, Morton said. [Images: Southwestern Wildfires Seen from Space]

Fires have scorched about 2.5 million acres this year, compared to 4.9 million acres at the same time last year. The total amount burned is running about 2 million acres below the 10-year average, according to the National Interagency Fire Center. That group said 28 firefighters have died battling blazes this year.

Overall, though, the total number of acres burned every year keeps rising, said Elizabeth Reinhardt, assistant director for fire and aviation management with the U.S. Forest Service in Washington, D.C. But researchers still don't know what's driving the increase, she said. The rise in acreage burned could come from a variety of factors, such as climate shift to a hotter, drier West after decades of cooler weather; pine beetle infestations that create more fuel to burn; or decades of fire suppression.

"Whether it's because we've been so successful at suppressing them or because we've had cool, wet decades, it's hard to say," Reinhardt said during the hangout. "It's difficult to know to what extent the current fire increases are climate-driven or fuel-driven."

Whatever the cause of the more frequent fires, population growth in the West has played a huge role in the ability of wildfires to damage and destroy life and property, the researchers agreed.

"If you put people into the wild lands and the grasslands, that guarantees fire," Bill Patzert, a research scientist at NASA's Jet Propulsion Laboratory in Pasadena, Calif., said during the hangout. "As more people move into harm's way, it becomes a serious problem."