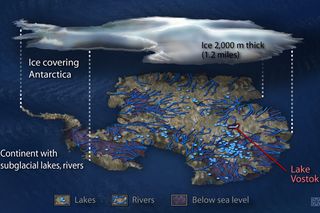 An artist's cross-section of Lake Vostok, the largest known subglacial lake in Antarctica. Liquid water is thought to take thousands of years to pass through the lake, which is the size of North America's Lake Ontario.
(Image: © Nicolle Rager-Fuller / NSF)

"The lake has been ice-covered for at least 15 million years," said Brent Christner, a Louisiana State University biologist who has examined ice cores collected above the lake.

Lake Vostok is one of the largest lakes on Earth in size and volume, rivaling Lake Ontario in North America. The lake itself is 143 miles (230 km) long, 31 miles (50 km) wide and as much as 2,625 feet (800 meters) deep. Lake Vostok sits near the South Pole in East Antarctica. The presence of a large buried lake was first suggested in the 1960s by a Russian geographer/pilot who noticed the large, smooth patch of ice above the lake from the air. Airborne radar experiments by British and Russian researchers in 1996 confirmed the discovery of the unusual lake.

"Lake Vostok is one of the easiest subglacial lakes to detect due to its size," Christner said. "[Yet] I believe most of its secrets remain."

Its only water supply is meltwater from overlying ice sheet, Christner said. "To my knowledge, there is no evidence for influx or efflux of water from Lake Vostok," he said. This constant replenishment from melting ice means the water in the lake may be relatively young, just thousands of years old, according to ice core studies. But the true age of the lake water is unknown.

Researchers have mapped Lake Vostok's shape with remote sensing techniques, such as seismic soundings and ice-penetrating radar. Lake Vostok is much shallower on one end than the other, with the two basins separated by a ridge. Some scientists think the ridge could be a hydrothermal vent, similar to the ocean floor black smokers that teem with tubeworms. The long, narrow lake may lie in a rift valley, similar to Lake Baikal in Russia.

Geothermal heat from the Earth keeps the temperature of the lake water hovering around 27 degrees Fahrenheit (minus 3 degrees Celsius), scientists believe. The weighty pressure of the overlying ice keeps the lake liquid despite its below-freezing temperature.

Life will find a way

In the 1990s, Christner was part of an international team that discovered microbes in frozen lake water collected above Lake Vostok's liquid surface, called accretion ice. The top half-inch (1 centimeter) of the lake surface freezes onto the flowing ice sheet above the lake, scientists think.

Analysis of the life forms suggests Lake Vostok may harbor a unique ecosystem based on chemicals in rocks instead of sunlight, living in isolation for hundreds of thousands of years. "The types of organisms we found suggested they derived their energy from minerals present in the lake and sources from the underlying bedrock," Christner said.

More recent studies of genetic material in Vostok's accretion ice revealed snippets of DNA from a wide variety of organisms related to single-celled creatures found in lakes, oceans and streams. These "extremophiles" could mimic life on other moons and planets, such as Jupiter's icy moon Europa. [Image Gallery: Alien Life of the Antarctic]

In a paper published June 26, 2013, in the journal PLOS ONE, researchers, led by Dr. Scott Rogers, a Bowling Green State University professor of biological sciences, discussed the thousands of species they identified in Lake Vostok through DNA and RNA sequencing.

The researchers took samples from two areas of the lake: the southern main basin and near an embayment on the southwestern end of the lake.

By sequencing the DNA and RNA taken from samples of accretion ice (frozen lake water attached to the bottom of the overriding glacier), the team discovered far more complexity than anyone thought, said Rogers, according to a press release.

"It really shows the tenacity of life, and how organisms can survive in places where a couple dozen years ago we thought nothing could survive," he said.

In addition to fungi and two species of archaea (single-celled organisms that tend to live in extreme environments), the researchers identified thousands of bacteria, including some that are commonly found in the digestive systems of fish, crustaceans and annelid worms, according to the press release.

They discovered psychrophiles (organisms that live in extreme cold) and heat-loving thermophiles, which suggests the presence of hydrothermal vents deep in the lake.

"Many of the species we sequenced are what we would expect to find in a lake," said Rogers. "Most of the organisms appear to be aquatic (freshwater), and many are species that usually live in ocean or lake sediments."

Rogers notes that the presence of both marine and freshwater species supports the theory that the lake once was connected to the ocean, and that the freshwater was supplied by the overriding glacier. The embayment contained the most biological activity with the largest number of species Identified.

After two years of computer analysis, the final results reveal that Vostok Lake contains a diverse set of microbes, as well as some multicellular organisms. Rogers emphasizes that the team erred strongly on the conservative side while reporting their findings. They chose to include only those sequences which they were absolutely certain came from the accretion ice. Because of this, Rogers believes there are most likely a multitude of others from the lake, opening the door to further research.