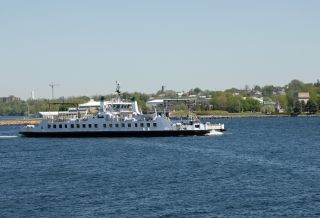 Lake Ontario is the smallest of all the Great Lakes, with a surface area of 7,340 square miles (18,960 square kilometers), but its waters run deep. It holds about four times the water volume, at 393 cubic miles (1,640 cubic km), as Lake Erie, although it is similar in width and length. In 2017, the water levels of Lake Ontario reached its highest in 100 years. This lead to massive flooding and ground erosion.

The easternmost of the Great Lakes, Lake Ontario is positioned at the base of the Niagara Falls. It is bordered by Ontario, Canada, to the southwest and north and New York to the south. The St. Lawrence River provides the lake's outlet to the Atlantic Ocean. The lake has a number of lagoons and baymouth bars, which are formations made of sand, mud or other debris that close off bay areas.

There are a number of islands on the lake, including the Thousand Islands region, which is an archipelago of nearly 2,000 islands that line the U.S. and Canadian border. While many of the islands are small or even uninhabitable, the largest is Wolfe Island. It is 48 square miles (124 square km).

Lake Ontario may be the most polluted out of the five Great Lakes. All of the other lakes flow into it, giving it their pollution. It also receives runoff from farms and businesses around it, according to the University of Wisconsin Sea Grant Institute.

Like all of the Great Lakes, Lake Ontario as it is known today was the result of glacial shifting and melting at the end of the most recent Ice Age.

The lake's name comes from an Iroquois word for "a beautiful lake." The first European to see reach Lake Ontario was Étienne Brulé, the French explorer and protégé of Samuel de Champlain. Brûlé is believed to have reached Lake Huron and Lake Ontario around 1615, according to the Canadian Museum of History.

In the 17th and early 18th centuries, the French built forts along the edges of the lake. The lake has a rich history of commerce and trade, especially following the War of 1812, when canals were built and traveled by heavy steamships. The lake was a hub of commerce until the railroads were built and eclipsed the steamers as a way to move shipment.

Because of the lake's depth and the warm weather that comes in from the southwest, Lake Ontario rarely freezes over. Water temperatures reach a high of about 75 degrees Fahrenheit (24 degrees Celsius) in August to a low of about 37 F (3 C) in February. The lake typically freezes just around the edges, closing its harbors from mid-December to mid-April, according to Encyclopedia Britannica.

While the entire region is affected by lake-effect snow, there is a prominent snow belt along the southeastern shore that can be deluged with 20 feet (600 centimeters) of snow annually. The impact of the lake-effect snow can be felt as far as Syracuse, N.Y., which is one of the snowiest cities in the United States.

Walleye, Coho salmon and Chinook salmon and a number of trout varieties, including rainbow and steelhead, are some of the fish that swim the waters of Lake Ontario. Invasive mussels cover much of the bottom of the lake in the coastal areas.

Lake Ontario's climate is conducive to fruit trees, and the area has become a major growing area for apples, cherries, peaches, pears and plums.

Due to its location, Lake Ontario is host to a number of migratory birds. Swans, loons, ducks, geese, grebes and other water fowl are among the wildlife that inhabit Lake Ontario. Birds of prey such as hawks and eagles are also common in the area.