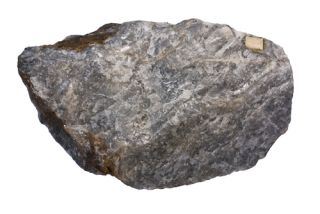 Named after the Greek word barys for "heavy," barium is a relatively dense and reactive alkaline earth metal. It is only found naturally when combined with other elements, and compounds containing barium have a wide range of uses; they are found in rat poison, weighting agents in oil drilling fluids, and the white fluid used to visualize intestines in an x-ray diagnostic test called a barium enema.

Vincenzo Casciarolo, a 17th-century Italian alchemist, first noticed barium in the form of unusual pebbles that glowed for years after exposure to heat, according to the Royal Society of Chemistry. He named these pebbles "Bologna stones" after his hometown, but they were later determined to be barium sulfate (BaSO4). In the late 18th century, barium oxide (BaO) and barium carbonate (BaCO3) were discovered by German chemist Carl Scheele and English chemist William Withering, respectively.

Pure barium metal was not isolated and identified until 1808 at the Royal Institution in London. The prominent chemist and inventor Sir Humphry Davy used electrolysis to separate the barium from molten barium salts such as barium hydroxide (Ba(OH)2). During electrolysis, an electric current is run through the ionic substance in order to separate ions from each other. Because the barium salts were molten, the barium ions easily moved to the container with the negative electrode, and the other negative ions easily moved in the opposite direction to the container with the positive electrode.

Barium is found naturally only in combination with other elements because of its high level of reactivity. Barium is most commonly found combined with sulfate and carbonate, but can also form compounds with hydroxide, chloride, nitrate, chlorate, and other negative ions. About 0.05 percent of Earth's crust is barium, making it the 17th most abundant element in the crust, according to Robert E. Krebs in his book, "The History and Use of Our Earth’s Chemical Elements: A Reference Guide" (Greenwood Publishing Group, 2006). Mining reserves in the United Kingdom, Italy, Czech Republic, United States and Germany contain over 400 million tons of barium, according to John Emsley in his book, "Nature’s Building Blocks: An A-Z Guide to the Elements" (Oxford University Press, 1999).

In order to obtain pure elemental barium, it must be separated from other elements present in naturally occurring barium compounds. Barium can be extracted from barium chloride through electrolysis. Barium can also be obtained by reducing barium oxide using aluminum or silicon in a high-temperature, low-pressure vacuum.

Pure barium is a soft, silvery white metal. Classified as an alkaline earth metal, it is located in group, or column, 2 on the periodic table, along with beryllium, magnesium, calcium, strontium and radium. Each of their atoms contains two valence (outermost) electrons. Barium is in period, or row, 5, so it holds its valence electrons in its fifth shell and can lose the electrons, or become oxidized, very easily. This accounts for barium's high level of reactivity especially with electronegative elements like oxygen.

Elemental barium does not have many practical uses, again due to its high level of reactivity. However, its strong attraction to oxygen makes it useful as a "getter" to remove the last traces of air in vacuum tubes. Pure barium can also be combined with other metals to form alloys that are used to make machine elements such as bearings or spark plugs in internal combustion engines. Because barium has a loose hold on its electrons, its alloys emit electrons easily when heated and improve the efficiency of the spark plugs, according to Krebs.

Compounds containing barium have a variety of commercial uses. Barium sulfate, or barite, is used in lithopone (a brightening pigment in printer paper and paint), oil well drilling fluids, glassmaking and creating rubber. Barium carbonate is used as a rat poison, and barium nitrate and barium chlorate produce green colors in fireworks.

Barium in your body

The average adult contains about 22 mg of barium because it is present in foods such as carrots, onions, lettuce, beans, and cereal grains. Barium levels in your teeth can actually help scientists determine when babies transition from breast-feeding to eating solid foods. These low levels of barium serve no biological role and are not harmful.

However, large quantities of soluble barium salts can be toxic and even deadly, according to John Emsley in his book "The Elements of Murder: A History of Poison" (Oxford University Press, 2005). Barium can cause vomiting, colic, diarrhea, tremors and paralysis. There have been a handful of murders with barium compounds, including a 1994 murder of a man in Mansfield, Texas, by his 16-year-old daughter, Marie Robards, who stole barium acetate from her high school chemistry laboratory. Several patients were also accidentally killed by barium when soluble barium carbonate rather than insoluble barium sulfate was mistakenly used during a gastroenterological (GI) diagnostic test called a barium enema.

Doctors perform barium enemas in order to visualize and diagnose abnormalities of the large intestine and rectum, according to Johns Hopkins Medicine. During the procedure, barium sulfate is instilled via the rectum to coat the inner walls of the large intestine. Air is typically administered next to make sure the barium coating fills all surface abnormalities. Then, X-raysare used to produce an image of the lower GI tract. Barium sulfate absorbs X-rays and appears white on the X-ray film, in contrast to the air and surrounding tissue that appear black. Analysis of the X-ray image from the barium enema enables physicians to diagnose disorders such as ulcerative colitis, Crohn's disease, polyps, cancer, and irritable bowel syndrome.