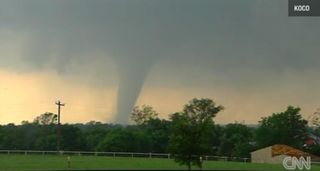 A monstrous tornado that ripped through Oklahoma Monday (May 20) piling cars on top of one another, demolishing an elementary school and killing several adults and children, may owe its power and deadliness partly to a convergence of jets of air, say meteorologists.

"I think from looking at the helicopter footage, it's safe to say at its strongest point it was probably 2 miles [3.2 km] across, that's a safe assumption," Kurt Van Speybroeck, a meteorologist with the National Weather Service based in Fort Worth, Texas, told LiveScience. [Image Gallery: Moore, Okla., Tornado Damage]

"The debris ball from the tornado, as seen on Doppler radar, expanded to over 2 miles in diameter, and debris was carried over 100 miles [160 km] from Moore," Jeff Masters of Weather Underground wrote on his WunderBlog.

Tornado science is complex and several ingredients are needed to create a monster vortex like the one that spun through Moore; and even then, meteorologists say they can't identify exactly which storms will spawn tornadoes.

"The jet stream had a role, but of course, it is much more complex than that," Keith Brewster of the Center for Analysis and Prediction of Storms at the University of Oklahoma told LiveScience. "There are several ingredients involved in the creation of a tornado; these include a source of warm, moist air at the surface and colder, generally drier, air above."

Those ingredients were in place yesterday. Essentially, the perfect storm seemed to come together right over Moore.

"The atmosphere was just right in Moore, Oklahoma, for a violent tornado. If you'd gone 25 miles to the north, they had storms but no tornado," Van Speybroeck said. "Right in that location, we call that the local mescoscale, everything was just right in that storm for it to create that really violent vortex."

To rev up a tornado, wind shear, or a change in wind speed and direction with height, is also needed. "Finally, you need some sort of triggering process to set it all off; in today's case, we had the convergence of air on the dryline southwest of Moore," Brewster told LiveScience on Monday night. That created the supercell storm that spawned Monday's devastating tornado.

The atmosphere above Oklahoma was set up perfectly to spawn tornadoes, due to the convergence of three jetlike streams, including the dry air from the southwest, Van Speybroeck said.

A low-level jet, at an altitude of about 5,000 feet (1,520 meters) was bringing warm, moist and unstable air up from the Gulf of Mexico. Just above that layer, from about 12,000 to 15,000 feet (about 3,700 to 4,600 m), a southwesterly jet of dry air blew in from the plateau of Mexico and northern Mexico. This southwesterly flow created the turning of the atmosphere above the unstable layer, Van Speybroeck said. The result can be a long-lasting supercell thunderstorm that is ripe for tornado spawning, which is what happened over Moore.

Adding to the mix, at about 20,000 to 25,000 feet (6,000 to 7,600 m), a high-speed jet of cold, dry air swooped west across the Rockies. This upper-level jet can reach speeds of 80 to 100 mph (130 to 160 km/h), and the air in it gets colder and drier with height, acting to pull the warmer, moist air upward and creating updrafts. Updrafts push storm winds that are rotating horizontally so that they are rotating vertically, creating a funnel cloud. Rains and hail in a storm then push the tail of the funnel cloud down until it touches the ground.