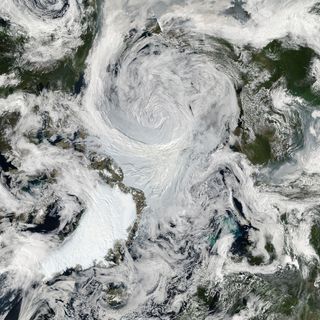 An unusually strong storm formed off the coast of Alaska on Aug. 5, then moved over the central Arctic, where a NASA satellite took pictures of it that have been pieced together into a mosaic of the stunning sight.

The Moderate Resolution Imaging Spectroradiometer (MODIS) on NASA's Aqua satellite took the images that make up the mosaic during various passes over the North Pole on Aug. 6, when the storm was swirling over the middle of the Arctic Ocean.

Seeing such strong storms in the Arctic during August is a rare occurrence. Paul A. Newman, chief scientist for Atmospheric Sciences at NASA's Goddard Space Flight Center in Greenbelt, Md., estimates that there have only been about eight storms of similar strength during the month of August in the last 34 years of satellite records, according to a NASA statement.

"It's an uncommon event, especially because it's occurring in the summer. Polar lows are more usual in the winter," Newman said in the release.

Storms like this can impact Arctic sea ice and cause it to melt rapidly as it churns the ice and potentially pushes it into warmer spots of water.

"It seems that this storm has detached a large chunk of ice from the main sea ice pack. This could lead to a more serious decay of the summertime ice cover than would have been the case otherwise, even perhaps leading to a new Arctic sea ice minimum," said Claire Parkinson, a climate scientist with NASA Goddard. "Decades ago, a storm of the same magnitude would have been less likely to have as large an impact on the sea ice, because at that time the ice cover was thicker and more expansive."

Sea ice this year in the Arctic has been trending below the 1979-2000 average, also potentially setting up a record low year. Though the jury is still out on what will happen for the remainder of the summer months.