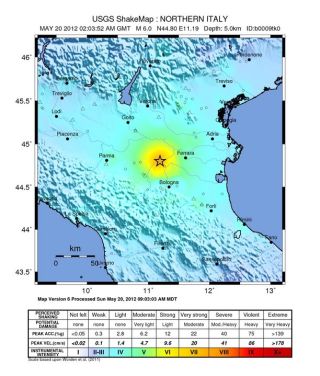 The intensity of shaking from the 6.0 magnitude earthquake that struck northern Italy on May 20, 2012.
(Image: © USGS)

Parts of northern Italy are realing after a powerful earthquake struck in the wee hours of Sunday morning, killing four people and causing extensive damage to buildings, according to news reports.

The magnitude 6.0 earthquake struck about 2 miles (4 kilometers) east-northeast of the town of Camposanto in the Bologna region of Italy at about 4 a.m. local time on May 20 (about 10 p.m. EDT, May 19), according to the U.S. Geological Survey. The earthquake ruptured at a depth of about 3 miles (5 km).

The Associated press quoted an official with Italy's civil defense agency as saying the earthquake was the worst in the region since the 14th century. The last major earthquake to strike the country was the 6.3 magnitude earthquake that struck the medieval city of L'Aquila in the Abruzzo region of the country in 2009. That earthquake killed more than 300 people and the city's center has not yet recovered from the damage, according to news reports.

Six scientists and a government official have been put on trial for manslaughter for not issuing sufficient warnings for the earthquake risk in the area, to the dismay of seismologists around the world.

Two of the dead in the Bologna earthquake were night-shift factory workers who were killed when the building they were in collpased, the Associated Press reported.

The temblor was preceded by a 4.1 quake and followed by a 5.1 magnitude aftershock.

Much of Italy is seismically at risk due to the crashing together of several tectonic plates in the area, which make it geologically complex.