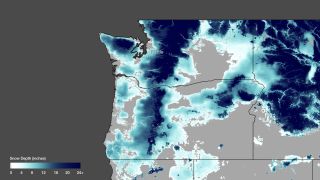 Now is the time to stock up on toilet paper, bread and milk, denizens of Seattle. The Emerald City could be hit with up to two winter's worth of snow in the next 48 hours.

That means it's time to say goodbye to this year's wimpy winter — snow, sleet and ice are all forecast for the Pacific Northwest. In Seattle, the weather will be particularly nasty. By Thursday (Jan. 19), Seattle could see up to 1.5 feet (0.5 meters) of snow, according to the National Weather Service.

"With the possibility of significant snowfall, we are urging residents to be prepared," Seattle Mayor Mike McGinn told the Seattle Post-Intelligencer.

The weather started to turn abominable today (Jan.17), and videos of cars sliding on the ice were posted to YouTube. Snow and icy roads forced Seattle public schools to open two hours late and close two hours early. School officials will decide by 7 p.m. PT if tomorrow (Jan. 18) will be a snow day. Big buses and icy roads are a bad combination, and the city will be hard at work to keep the main roads clear.

"We have crews from our department of transportation ready with about 22 snowplows," Scott Thomsen, spokesman for the city of Seattle, told the Weather Channel.

For Seattle, snow is somewhat of a weather rarity. The city isn't as "snow-torious" as Chicago, or many other cities in the northern half of the country. Seattle rarely gets more than half a foot of snow on a single day. Since 1948, it's happened 11 times, according to the Weather Channel. Seattle's average winter snowfall total from 1981 to 2010 is 5.9 inches (15 cm), according to the U.S. National Oceanic and Atmospheric Administration. Chicago gets 37.7 inches (96 cm) and New York City (where snow has been a no-show this year) gets 26.7 inches (68 cm) in an average winter.

The winter storm will fully grip western Washington early tomorrow morning as a low-pressure system sweeps into the Puget Sound, bringing a lot of moisture. The system could dump as much as 6 to 14 inches (15 to 36 cm) of snow on the southwest interior and central Washington coast, and similar totals to the metro areas of the central Puget Sound region. Lowland snowfall will be somewhat less for the northern portions of western Washington.

This week's snowstorm will also be felt outside of Seattle. Accumulations of multiple feet of snow are possible in parts of the Washington and Oregon Cascades and into the ranges of Idaho and northwest California.

In addition to heavy lowland snow, this storm will produce heavy mountain snow and increasing avalanche danger over the Olympic and Cascade mountains.