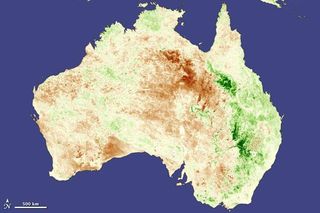 Healthy, growing vegetation in Australia is shown in this 2008 map.
(Image: © NASA)

More than three million years ago, the landscape of Australia's western coast was changed forever as the region's once-lush rainforests disappeared. Now, researchers have discovered a somewhat surprising cause.

Researchers have found evidence that the transformation of the region is likely due to tectonic activity . However, it was not the Australian continent shifting into a new climate zone that caused the rainforest to morph into semi-arid grasslands, but rather a geological upheaval in the waters that runs between Australia and Indonesia.

During what is called the Pliocene era, tectonic activity pushed islands up throughout the waters known as the Indonesian Throughflow, which carries warmer waters westward from the Pacific Ocean into the Indian Ocean and downward into the Leeuwin Current, which runs along the west coast of Australia.

Researchers from Germany examined preserved shells from sites in the areas of these waters and found that during the Pliocene, the water in the Leeuwin Current cooled by about 3.6 to 5.4 degrees Fahrenheit (2 to 3 degrees Celsius) over the relatively short time of about 200,000 years. The result was less rain on land, and the eventual drying out of the entire western Australia coast.

"Our new findings underline the climatic importance of tropical seaways," said study leader Cyrus Karas, a paleoceanographer at the Institute of Geosciences at Goethe University, Frankfurt in Germany. "This can change even vegetation by reducing the precipitation over coastal areas."

Australia is not alone. The technology and science to reconstruct ancient changes in oceans has gotten much better in recent years, Karas said. Paleoceanographers have also been actively studying the closure of the Panama Seaway during the Pliocene and how that may have contributed to changes in the North Atlantic and the Gulf Stream .

Karas and his colleagues also noted in their study that the Indonesian Throughflow does not stop once it hits the Indian Ocean. During the same time that changes were being wrought in Australia, the researchers think that the constriction in the Indonesia region could have caused changes as far away as the Benguela current, which flows north along the west coast of southern Africa.

"Of course, we have a lot more to learn about the constrictions of seaways," Karas told OurAmazingPlanet. "The paleoceanographic processes are still not entirely deciphered."

The findings of the study were detailed in the June issue of the journal Paleoceanography, which is published by the American Geophysical Union.