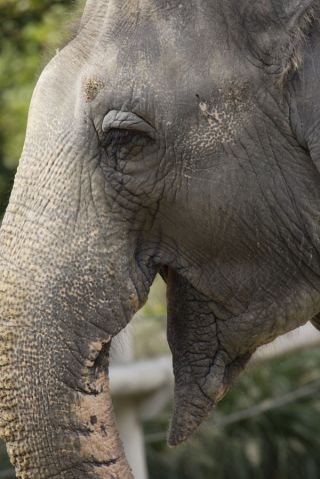 In an attempt to further conservation efforts for the Asian elephant, veterinarians at the Smithsonian National Zoo have performed a series of artificial insemination procedures on Shanthi, a 34-year old Asian elephant.

A successful pregnancy would be an important milestone in the zoo's commitment to Asian elephant conservation, zoo officials said in a statement.

For now, Scientists will monitor the level of the hormone progesterone in Shanthi's blood. If concentrations they find are elevated and stay that way for more than 10 weeks after insemination, it most likely would mean she is pregnant. An Asian elephant's gestation period ranges from 20 to 22 months.

This discovery was very useful, as artificially inseminating an elephant is a challenging and difficult medical procedure. The artificial insemination must be timed properly: Elephants have two surges of luteinizing hormone in about a three-week period. Using blood samples, scientists are able to detect when the first surge occurs. The second luteinizing hormone surge follows about 20 days later, and that is when artificial insemination takes place.

Other factors for success include a healthy reproductive tract for the elephant. The semen used for the procedure must also be of good quality and must be placed correctly in the cervix and/or uterus.