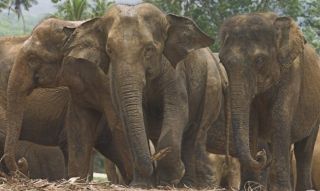 A new survey of dung has revealed a population of hundreds of endangered Asian elephants living in a Malaysian park. The animals could be the largest-known set of these pachyderms in Southeast Asia. The researchers counted dung piles to estimate that there are 631 Asian elephants living in Taman Negara National Park — a 4,343 square kilometer (1,676 square mile) protected area in the center of Peninsular Malaysia. This result confirms the largest-known population of elephants remaining in this part of the world, according to the New York-based Wildlife Conservation Society (WCS) and Malaysia’s Department of Wildlife and National Parks (DWNP), which partnered to study the elephants.

Asian elephants are endangered due to habitat loss and poaching; between 30,000 and 50,000 may remain in 13 Asian countries. The Asian elephant is listed on the Convention on International Trade in Endangered Species and has seen a drastic reduction in total population across its range as a result of illegal poaching, increased human-wildlife conflict and other threats.

There are two distinct species of living elephants, the African elephant (Loxodonta africana) and the Asian elephant (Elephas maximus). The difference:

The African elephants are further subdivided into two subspecies:

There are about half a million African elephants in the wild, according to the International Union for Conservation of Nature and Natural Resources.

"The surveys reveal the importance of Taman Negara in protecting wildlife especially those species that need large home ranges. DWNP will continue to safeguard this national park, which is the crown jewel of Malaysia's protected areas system. The numbers of elephants is testament to the importance of the park in protecting wildlife," said Dato' Rasid, director-general of the Department of Wildlife and National Parks. Researchers were unsure of how many elephants lived in the park before this survey, although there were good reasons to think that the population was substantial, said Melvin Gumal, director of the WCS's conservation programs in Malaysia.             The park, which contains one of the world's oldest rainforests, dating back 130 million years, also supports tigers, leopards, dholes, numerous monkey species and 350 types of birds.