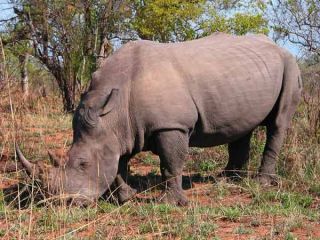 A female white rhinoceros has successfully given birth to a calf after being artificially inseminated with frozen semen, researchers announced today.

The first live birth of an artificially inseminated rhinoceros occurred in 2007, but that involved fresh semen from a male rhino in the same zoo.

The new feat involved using semen collected from a roughly 36-year-old Southern white rhinoceros (Ceratotherium simum simum), frozen for two to three years and then thawed. Two attempts were made to fertilize the eggs of a 30-year-old female rhinoceros with that thawed semen. The second attempt resulted in the female getting pregnant and giving birth to a healthy calf.

At the time of conception, the female rhino lived at the Budapest Zoo in Hungary, and the male donor resided at Colchester Zoo in the United Kingdom.

The success has implications for conservation of rhinoceroses. While rhinos have existed on Earth for more than 50 million years, comprising an array of species, today only five rhino species survive. And nearly all are on the verge of extinction.

Smithsonian officials and others say that developing viable captive populations of rhinos is critical to the animals' survival.

"The use of frozen-thawed semen holds great potential as a means to overcome the crisis most captive and wild rhinoceros populations are facing in various ways," write Robert Hermes of the Leibniz Institute for Zoo and Wildlife Research in Germany and his colleagues in an upcoming issue of the journal Theriogenology.