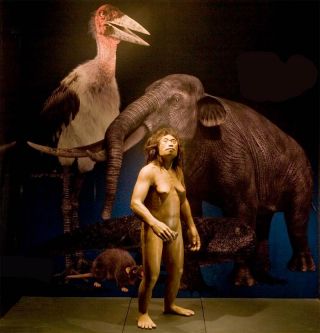 The hobbit, Homo floresiensis, lived on the island of Flores some 18,000 years ago, and now researchers have more evidence (its relatively large brain) the diminutive creature was a unique human species.
(Image: © © National Museum of Nature and Science, Tokyo )

Homo floresiensis, dubbed "the Hobbit," was an ancient hominin that lived until at least 17,000 years ago.

Scientists discovered the first H. floresiensis fossil, along with stone tools and animal remains, in 2003 in the Liang Bua (LB) cave on the remote Indonesian island of Flores, according to a 2004 Nature paper. This first specimen — a 3.5-foot-tall (1.06 meter), 30-year-old adult female called LB1 — comprised a nearly complete skull and an associated skeleton, which includes several limb bones, hand and foot bones and a partial pelvis, according to the journal Nature.

"Its associated skeleton is one of the things that makes this specimen quite exciting," Mark Collard, a biological anthropologist at Simon Fraser University in Burnaby, British Columbia, told Live Science "We don't have very many associated skeletons of hominins outside of Neanderthals."

LB1's tiny build earned the species the nickname of "the Hobbit," after the tiny folk in J.R.R. Tolkien's book of the same name.

In addition to LB1, archaeologists later discovered jaw and skeletal remains of at least eight other diminutive individuals, according to a 2009 article in the Journal of Human Evolution.  The small stature of these specimens suggests LB1 wasn't an anomaly.

Initial dating of the hobbit remains gave the species an age range of 74,000 to 17,000 years ago. However, dating of the associated tools and sediment deposits where the remains were discovered suggests H. floresiensis may have lived from as early as 95,000 years ago until about 12,000 years ago, according to a 2005 paper in Nature.

Just how H. floresiensis fits into the family tree of hominins — which includes those species that evolved after the human lineage (of the genus Homo) split from the chimpanzees — is unclear.  Scientists have debated whether the hobbit specimens represent an extinct species in the human family tree, perhaps a squat offshoot of Homo erectus, a 1.8-million-year-old hominid and the first to have body proportions comparable to those of modern Homo sapiens. More recent arguments suggest the hobbit specimens may have evolved from a pre-H. erectus hominin.

In fact, scientists have sought to learn more about the evolution of this hobbit, looking for clues, for instance, for hobbit ancestors on other Indonesian islands. In one study, detailed in the Jan. 14, 2016, issue of the journal Nature, a team of researchers looked for such clues on the Indonesian island of Sulawesi, situated between Flores and continental Asia. There, they found stone tools dating back at least 118,000 years, suggesting a hobbit ancestor lived on the island before modern humans showed up some 50,000 years ago, said study researcher errit van den Bergh, a paleontologist and zooarchaeologist at the University of Wollongong in Australia. The researchers aren't sure who this toolmaker was, though three possible candidates are: the hobbits, Homo erectus and the Denisovans, close relatives of Neanderthals.

Based on LB1, experts estimate H. floresiensis weighed between 35 and 79 lbs. (16 and 36 kg), according to a 2004 Nature article describing the specimen.

The hobbit specimens show a unique set of ancestral features (primitive traits retained from an ancestor species) and derived features (evolved features not shared by ancestors). They had skulls that resembled early Homo species, including a flat, sloping forehead and a short, flat face; however, their teeth and jaws more closely resembled Australopithecus (Homo ancestors), according to Nature.

Additionally, in a 2007 study in the journal Science, researchers closely analyzed three wrist bones of LB1 and found they more closely resembled those of apes than modern humans. This finding implied that H. floresiensis was indeed a separate species from modern humans.

In 2012, Susan Hayes, a senior research fellow at University of Wollongong, New South Wales, Australia, and her colleagues fleshed out the female hobbit's face by uploading information from 3D imaging scans of its skull into a computer graphics program. Compared with portraits of the hobbit by paleo-artists, Hayes' facial depiction of H. floresiensis showed more modern human features instead of monkey-like traits. The hobbit, in this depiction, doesn't have feminine doe eyes, and she lacks much of a forehead. What's more, the newly modeled portrait has a wider, shorter face and a comparatively modern nasal structure than previous face models, according to the researchers' 2013 study in the Journal of Archaeological Science.

What else do we know about Homo floresiensis?

When researchers first unearthed H. floresiensis, they also uncovered stone tools and animal remains in the same sediment layers of the Liang Bua cave. The tools were simple and Oldowan-like, resembling the earliest and most primitive types of tools in the fossil record.

Inside the Liang Bua cave, scientists later found several bird fossils, including wing and leg bones from what appears to have been a stork nearly 6 feet tall (1.8 meters), according to a 2010 study in the Zoological Journal of the Linnean Society. The marabou stork (Leptoptilos robustus), which lived some time between 20,000 and 50,000 years ago, would've fed on fishes, lizards, other birds … and possibly even juvenile hobbits, though there is no direct evidence for that sort of feasting, researchers say.

Research has also focused on the question of whether or not the hobbits lived alongside modern humans, who likely would have shown up on Indonesian islands like Flores about 50,000 years ago, scientists say. Previous work had suggested the hobbits occupied the cave between about 12,000 and 95,000 years ago, providing a wide overlap between the hobbits and their bigger-bodied relatives. In more recent research, published online March 30, 2016, in the journal Nature, scientists found evidence that the hobbits vanished from the island earlier than those previous dates. By exposing new layers of the Liang Bua cave and analyzing the sediment and fossils within it, the scientists concluded Homo floresiensis was alive and kicking in the cave between 190,000 and 50,000 years ago. Even if the two did live alongside each other, it would not have been for long, the researchers said.

Was Homo floresiensis a separate species?

Critics have argued the specimen belonged to an extinct human with microcephalia, a pathological condition characterized by a small head (the hobbit is estimated to have a brain about one-third the size of modern humans), short stature and intellectual disabilities.

A study published in 2013 in the journal Proceedings of the Royal Society B revealed H. floresiensis had a larger brain than once thought. The CT scan of the hobbit skull suggested its brain was about 426 cubic centimeters (nearly 26 cubic inches), instead of the commonly cited 400 cubic cm. That's more than one-third the size of the modern human brain, which boasts an average volume of about 1,300 cubic cm, or 79 cubic inches.

The findings suggested H. erectus may be the ancestor of H. floresiensis, as Javanese specimens of H. erectus had brains about 860 cubic cm (52 cubic inches) in size. Alternatively, the hobbit may have evolved from H. habilis, whose brains were only about 600 cubic cm (37 cubic inches), the research suggested.

Most recently, a research team used a different pathological argument to suggest H. floresiensis was not a distinct species. In their study, published in 2014 in PNAS, they argued that LB1's cranial features are diagnostic of Down syndrome.

However, in a PNAS letter responding to the paper, Collard and his colleagues refuted this claim, arguing that H. floresiensis lacks the jaw structure — specifically the chin — that's a defining characteristic of Homo sapiens (the original study's authors later penned another response to reaffirm their stance).

"There has been a lot of focus on the possible pathologies of these specimens, particularly LB1," Collard said. "[Researchers] focused on the pathology of the specimens without demonstrating anything that links them to Homo sapiens." While LB1 could very well have some kind of pathology, "she doesn't have characteristics that would lead us to think she is a pathological Homo sapiens," he added.

In a study published July 22 in the Proceedings of the Royal Society B, Collard and his colleagues compiled a dataset containing 380 skull and dental features for the 20 known hominin species. After analyzing and comparing these features using statistical models, they concluded that H. floresiensis was, indeed, a distinct species and not just a small-bodied or deformed human.