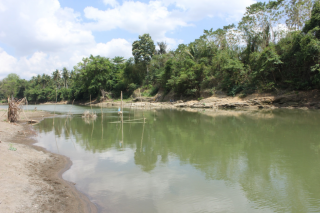 A mysterious relative of the extinct human species nicknamed the "hobbit" may have once lived on the Indonesian island of Sulawesi, new research suggests.

This finding could one day help shed light on the evolution of the hobbit, the researchers noted in the study.

In 2003, scientists unearthed 18,000-year-old fossils on the Indonesian island of Flores. The fossils belonged to an unknown hominin, a close relative of modern humans. Since then, scientists have suggested that this hominin, which had a brain about the size of a grapefruit, was a unique branch of the human lineage named Homo floresiensis and popularly known as "the hobbit" because of its diminutive 3-foot (1 meter) stature. [See Images of the 'Hobbit' and Evidence of Newfound Ancestors]

Since the hobbit's discovery, researchers have sought to uncover its evolutionary origins. In 2010, scientists revealed that stone tools found on Flores suggest that the hobbit's ancestors lived there 1 million years ago. As such, these potential direct ancestors of hobbits may have descended from Homo erectus, the earliest undisputed ancestor of modern humans. The first fossils of Homo erectus were found on the Indonesian island of Java in the 19th century; subsequent research has unearthed Homo erectus specimens on Java about 1.5 million years in age.

To find out more about how the hobbit's ancestors might have migrated to Flores, scientists have searched for clues on other Indonesian islands. They focused on the island of Sulawesi, which lies between Flores and continental Asia.

Sulawesi is the largest and oldest island in Wallacea, a group of islands separating Asia from Australia. Given Sulawesi's position north of Flores and Australia, Sulawesi likely played a key role in the settling of both islands, the researchers said.

Now, stone tools discovered on Sulawesi dating back at least 118,000 years suggest that an unknown lineage of toolmakers once lived there, the researchers said in the new study.

"There might have been a totally different human species living on Sulawesi before modern humans arrived with boats around 50,000 years ago," said study lead author Gerrit van den Bergh, a paleontologist and zooarchaeologist at the University of Wollongong in Australia. "Evolving under isolation on an island under hundreds of thousands of years in isolation, the outcome may have resulted in a distinct human species, different from Homo erectus or Homo floresiensis."

Excavations conducted between 2007 and 2012 in southeastern Sulawesi revealed four sites containing stone flakes — sharp artifacts likely used for cutting or scraping — dating back 118,000 to 194,000 years. These are the earliest signs of hominins seen on Sulawesi yet, the researchers said.

Because no human fossils of the same age as these newfound artifacts have been found on Sulawesi, the identity of these toolmakers remains uncertain. Three potential candidates include the hobbits, Homo erectus and the Denisovans, close relatives of Neanderthals that may have once interbred with modern humans.

The researchers said that undiscovered evidence of ancient hominins may be found on other islands in the region, such as Borneo and the Philippines. Such fossils and artifacts could help solve the evolutionary mysteries of Indonesia.

"Now, we can start trying to find fossil evidence of the makers of these ancient tools," van den Bergh told Live Science.

The scientists detailed their findings in the Jan. 14 issue of the journal Nature.