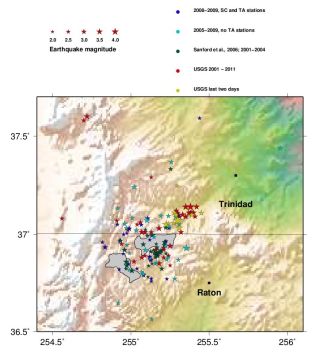 An ongoing earthquake swarm in New Mexico and Colorado, which includes Colorado's largest earthquake since 1967, is due to underground wastewater injection, researchers said Friday (April 19) at the Seismological Society of America's annual meeting in Salt Lake City.

The earthquakes are concentrated near wastewater injection wells in the Raton Basin, where mining companies are extracting methane from coalbeds. The basin, which is actually a series of rock layers exposed in the Rocky Mountain foothills, stretches from northeastern New Mexico to southern Colorado.

Since 2001, seismicity has increased rapidly in the region, said Justin Rubinstein, a U.S. Geological Survey (USGS) research geophysicist and lead author of one of several studies on the Raton Basin presented at the meeting. The rapid rise in earthquakes followed a significant increase in wastewater injection starting in 1999, he said. Wastewater injection is the disposal of water and brine produced from fracking. When mining companies extract resources via fracking, they inject water to make new fractures. After the water is removed, it's usually stored nearby, in porous rocks deep underground.

There were 20 times as many magnitude-3 or larger earthquakes between 2001 and 2011 as there were from 1970 to 2001, Rubinstein said. The USGS also looked at larger earthquakes, removing foreshocks and aftershocks from the record, and still found a statistically significant increase, he said.

"Can this rate change be natural? I certainly don't think so," Rubinstein said.

One of the largest earthquakes linked to wastewater injection was the Aug. 22, 2011, magntiude-5.3 earthquake in Trinidad, Colo., which cracked walls and toppled chimneys in the historic town.

The earthquakes have revealed at least two faults cross the Raton Basin, concentrating earthquakes along their length, according to the USGS. Researchers think one way wastewater injection can trigger quakes is by increasing fluid pressure along faults, making it easier for them to rupture.

The largest earthquake linked to wastewater injection to date was a magnitude-5.6 earthquake in Oklahoma in 2011.