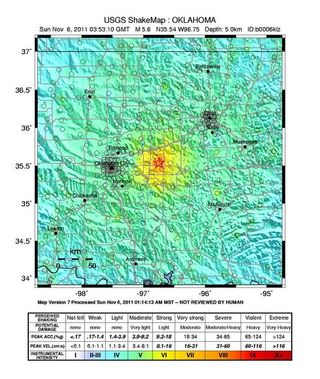 The largest-ever recorded quake in Oklahoma was caused by the injection of wastewater, a byproduct of oil extraction, into the ground, new research confirms.

On Nov. 6, 2011, a series of earthquakes, including a 5.6-magnitude temblor, struck the rural town of Prague, about 37 miles (60 kilometers) east of Oklahoma City, crumbling homes in the area and damaging a federal highway. The quake could be felt as far away as Milwaukee.

Now, a new study published March 26 in the journal Geology confirms that wastewater injected into the ground after oil extraction caused the quake. The quake is the largest wastewater-induced earthquake ever recorded. The wastewater was from traditional drilling, not the controversial hydraulic fracturing method.

Ever since wastewater injection was linked to a series of small quakes around Denver, Colo., in the 1960s, scientists have known that oil extraction could trigger temblors. When oil is extracted from the ground, lots of water, dubbed "wastewater," comes up as well. So oil companies sometimes pump the water back into the well, where it fills porous spaces within the rocks, Keranen said.

"It's almost a lubrication, it can push the fault apart," Keranen told LiveScience. "When you do that you lower the stress that's holding a fault together and you can cause it to slip."

But in the past, scientist thought the resulting quakes would be fairly benign: most of these triggered temblors are typically a 3 or 4 on the moment magnitude scale, Keranen said.

In theory, however, these man-made earthquakes could get even bigger — an especially worrisome possibility if they occur near population centers. [Image Gallery: Deadly Earthquakes]

"We don't know what the maximum size of earthquakes could be that we could trigger from disposal," Keranen said.

Whether or not an area is prone to such tremblers depends on the permeability of the local rock: If water can't seep through the rock easily, meaning it's not very permeable, pressure builds up and makes an earthquake more likely. Earthquake risk also depends on the presence and angle of faults in relation to the water-injection site.

Though the process that caused the Oklahoma earthquake didn't involve hydraulic fracturing, fracking often involves injecting spent water into the ground, which carries the same risks. In fracking, water, sand and other substances are injected into a well under high pressure in order to fracture the rock, creating fissures that help natural gas flow out.

There hasn't been much oil extraction on the East Coast, but as fracking takes off in areas like Pennsylvania, the risk of big quakes in the region needs to be considered, Keranen said.

Editor's Note: This article has been corrected to reflect the fact that earthquake strength is now measured on the moment magnitude scale, not the Richter scale.