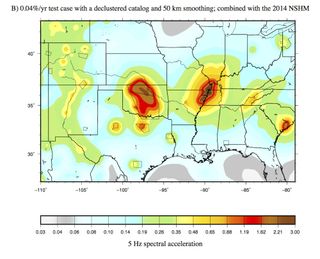 The maps highlight 17 hotspots where communities face a significantly increased risk of earthquakes, and the accompanying report links the earthquakes to wastewater injection wells. Previous maps did not include earthquakes that are induced by human activities.

"We consider induced seismicity to be primarily triggered by the disposal of wastewater into deep wells," said Mark Petersen, chief of the National Seismic Hazard Project for the U.S. Geological Survey, which released the maps on April 23. [Image Gallery: This Millennium's Destructive Earthquakes]

The earthquake hotspots include the states of Oklahoma, Kansas, Texas, Ohio, Arkansas, Alabama, Colorado and New Mexico. Until recently, many of these states were some of the places in the United States least likely to have an earthquake. But then, high oil prices brought in companies eager to exploit ancient seabeds where oil and gas mingle with brine.

Hydraulic fracturing, or fracking, extracts far more water from these underground oil-laden rocks than traditional drilling. Currently, there is no way to treat, store and release the billions of gallons of wastewater at the surface. Instead, drillers pump the fluid back underground, below groundwater, where it sometimes triggers earthquakes.

For instance, in Oklahoma, state records show that companies injected more than 1.1 billion barrels of wastewater into the ground in 2013, the most recent year for which data is available. The following year, Oklahoma had more magnitude-3 earthquakes than California. The quakes clustered around wastewater injection wells.

Oklahoma's current earthquake rate is now 600 times higher than its prefracking rate, which was based on the state's natural seismicity, the state geological survey said Monday.

"We suspect the vast majority of these earthquakes are from produced wastewater," said Austin Holland, head seismologist for the Oklahoma Geological Survey.

Fracking itself can also induce earthquakes, but the technique has never caused earthquakes greater than magnitude 4. For comparison, an Oklahoma injection well triggered a magnitude-5.6 earthquake in 2011. Mining blasts and geothermal energy plants can also trigger earthquakes.

Until now, the USGS has usually excluded man-made or induced earthquakes from its earthquake hazard maps. The researchers who make the maps assume earthquake rates are more or less the same through time, and that's not the case with man-made quakes.

"These earthquakes are different from natural earthquakes because they turn on and off over short periods of time, sometimes over a period of a year," Petersen said.

So even as north central Oklahoma and Texas were suffering swarms of earthquakes, the 2014 hazard map showed little to no shaking risk for these states. The national map shows where earthquakes may strike in the next 50 years, how big they might be and how strong the shaking could get.

But now, there is no way for scientists to ignore the incredible rise in earthquakes in the central United States. With input from more than 150 scientists, the USGS decided to release a separate earthquake hazard map for man-made earthquakes. Researchers gauged a region's shaking risk by first looking for changing earthquake rates. Then, the scientists counted the previous year's temblors to forecast the next year's tally.

A one-year model is not useful for issuing building codes, but it is helpful for planning future activities, such as where to spend limited funds on bridge repairs, said Bill Ellsworth, a USGS seismologist who is studying injection well earthquakes.

A simplified version of the man-made earthquake hazard map will be published by the end of the year and will be updated yearly thereafter, Ellsworth said. (The agency will continue to issue the long-term forecasts every six years.) Scientists are still fine-tuning models that predict the shaking strength from man-made earthquakes, which tend to be shallower than natural quakes.

Researchers involved in the mapping project called for expanded seismic networks and public access to well-injection records yesterday (April 22) here at the annual meeting of the Seismological Society of America. Only a few injection wells cause headaches, so this data would help determine whether the small earthquakes at wells could lead to more damaging ones later on.

"This monitoring would fundamentally change how often and how accurately we can update these maps," said Andy Michael, a USGS geophysicist in Menlo Park, California, who was involved in the project.