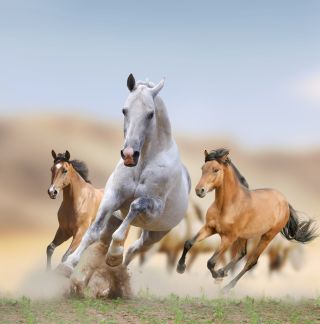 Mustangs are descendants of Spanish, or Iberian, horses that were brought to the Americas by Spanish explorers in the 16th century. The name was derived from the Spanish word mustengo, which means "ownerless beast" or "stray horse." Many people think that mustangs are simply wild horses rather than a specific breed. These horses bred with other types of horses, including quarter horses and draft horses, to create the breed we know today.

Horses belong to the genus Equus, which originated in North America about 4 million years ago and spread to Eurasia (presumably by crossing the Bering land bridge) 2 to 3 million years ago. The last prehistoric North American horses died out between 13,000 and 11,000 years ago, at the end of the Pleistocene, but by then Equus had spread to Asia, Europe, and Africa.

After the Spaniards re-introduced horses to the Americas, the Native Americans soon used these beasts for transportation. Pioneers liked these horses because they have fantastic stamina and speed. Plus, their stockier legs make them less prone to injury, making them ideal for long journeys. Since then, mustangs have been bred with French or thoroughbred horses.

Because mustangs are descendents of escaped domesticated horses, wildlife management agencies consider them to be "feral" rather than "wild," although this designation is controversial among mustang advocates. The Tarpan and the Przewalski are the only two breeds of truly wild horses to ever be discovered.

Mustangs are a medium-sized breed of horse. They measure around 14 to 15 hands. Hands are the common standard of measurement for horses. This equals 56 inches to 60 inches (140 to 150 centimeters). They weigh around 800 pounds (360 kg).

Like other mammals, mustangs have live births. Their babies are called foals. Mares carry their foal for an 11-month gestation period. Mustangs typically give birth to their foals in April, May, or early June, according to the American Mustang Handbook. This gives the young horse time to grow before the cold months of the year.

Mustangs have no natural predators. Without human intervention, their population can double in size every four years. Some have proposed contraceptive treatments that would help lower the population increase of these animals.

It is a common misconception that horses only eat hay or oats. Horses are omnivores. This means that they eat plants and meat. Mostly, though, wild mustangs eat grass and brush. They can stay a healthy weight on very little food. When food is readily available, adult mustangs eat around 5 to 6 pounds of food each day.

Mustangs live in the grassland areas of the western United States. The Bureau of Land Management manages the U.S. mustang population and allows the horses run free on 34 million acres of public land. About 271,000 mustangs have been removed from private land by the government since 1971, according to the American Wild Horse Preservation Organization. Most of the mustang populations are found in the Western states of Montana, Idaho, Nevada, Wyoming, Utah, Oregon, California, Arizona, North Dakota and New Mexico. Some also live on the Atlantic coast and on islands such as the Sable, Shackleford, Assateague and Cumberland Islands.

Mustangs live in large herds. The herd consists of one stallion, around eight females and their young, though separate herds have been known to blend when they are in danger. The herd is led by a female horse, or mare, and a stallion that is over 6 years of age. In dangerous situations, the head mare will lead her heard to safety, and the stallion will stay and fight.

Herds spend most of their time grazing on grasses, though it is not unusual to see them playing or snuggling together for a nap. Often, when it looks like they are fighting, young mustangs are actually playing a game, much like when human children wrestle.

According to the Integrated Taxonomic Information System (ITIS), the taxonomy of horses, and therefore of mustangs, is:

The mustang is not on any endangered list at this time, though there are people petitioning to change that. About 100 years ago, about 2 million mustangs roamed the North American terrain. Now, there are fewer than 25,000 mustangs left in the wild, according to the Humane Society.

In the wild, Mustangs can live up to 40 years. Hurt or disabled horses are protected by the herd and can live remarkably long lives when compared with other animal species that live in the wild.

In the Wild West, cowboys would catch, tame and sell mustangs. These cowboys were called "mustang runners." Mustangs were also hunted for their meat in the early 20th century. Sometimes their meat was used for pet food.