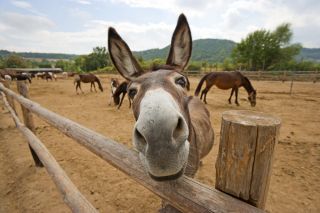 Donkeys have long, floppy ears and tend to be stockier than their cousins, horses and zebras.
(Image: © Yiorgos GR | Shutterstock )

Donkeys, also called burros and asses, are found throughout the world. They are members of the Equidae family, which also includes horses and zebras. They look a lot like their cousins, but have long, floppy ears and tend to be stockier than horses or zebras.

There are three main types of donkeys: wild, feral and domesticated. Wild donkeys typically grow to around 49 inches (125 centimeters) from hoof to shoulder and weight around 551 lbs. (250 kilograms).

Domesticated donkeys vary in size, depending on how they are bred. There are eight different types of domesticated asses, according to the Oklahoma State University. They typically weigh from 400 to 500 lbs. (180 to 225 kg) and 36 inches to 48 inches (92 cm to 123 cm) from hoof to shoulder.

Wild donkeys are only found in deserts and savannahs in northern Africa from Morocco to Somalia, in the Arabian Peninsula and in the Middle East.

Domesticated donkeys, on the other hand, are found all over the world, but prefer dry, warm areas. The Abyssinian donkey, for example, is bred in Ethiopia, according to Oklahoma State University, while the Anatolia donkey is bred in Turkey.

One species, the kiang or Tibetan wild ass is found in China, northern parts of Pakistan, India, Nepal and Bhutan.

Male donkeys are called jacks and females are called jennets or jennies. Donkeys are very social and usually live in a group called a herd. The herd is usually lead by one jack and consists of several jennies in the wild. Some larger herds have been found that include several males. As long as the additional males are submissive to the dominant male, everything goes smoothly. Donkeys don’t seem to form strong bonds, however. In the wild, herds often break up and reform with new members on a regular basis.

Donkeys spend their days resting during the hottest part of the day. They are more active during the mornings and evenings, traveling and eating with the herd.

Domestic donkeys are typically used for pack animals or for milk, according to The Global Invasive Species Database. Sometimes donkeys are trained to protect other livestock from predators. They will stomp any animal they feel is a threat.

Donkeys typically like to eat grass, though they also eat shrubs and desert plants. Instead of ripping the grass right away with their teeth, donkeys grab the plant with their lips, pull it in their mouth, then rip it with their flat teeth and grind it down for swallowing.

Donkeys are voracious eaters. A donkey can consume as much as 6,000 lbs. (2,722 kg) of food per year, according to The Global Invasive Species Database. This massive amount is concerning when it comes to feral donkeys. Feral donkeys can move into habitats and take food from the local animals.

While donkeys don’t seem to care who’s in their herd, they also don’t seem to be picky about who they breed with. In addition to other donkeys, they will breed with horses and zebras. The offspring are hybrids of the two types of Equidae. A jack and a female horse mating produces an animal called a mule, while a jenny and a male horse produce a hinny, according to the University of Miami. A mating between a zebra and a donkey produces what is called a zebroid, zonkey or zeedonk. Hybrids are almost always sterile and cannot produce offspring.

Donkeys have a gestation period of around 12 months. Baby donkeys are called foals. Foals weigh between 19 and 30 lbs. (8.6 to 13.6 kg) at birth and can stand and nurse after just 30 minutes after birth. At 5 months, foals are weaned and at 2 years they are old enough to mate. Females tend to give birth to a new foal each year.

Here is the taxonomy of donkeys, according to the Integrated Taxonomic Information System(ITIS):

While domestic donkeys are in no threat of being endangered, the same cannot be said for wild asses. According to the International Union for Conservation of Nature (IUCN), the African wild ass is critically endangered, with only 23 to 200 adults left. Asiatic wild asses are classified as near threatened, with a population of around 28,000.

If a donkey becomes feral it will search out a habitat that is warm and dry.

Asses usually have a dark stripe of fur down their backs and across their shoulders and can be born with a wide range of colors.