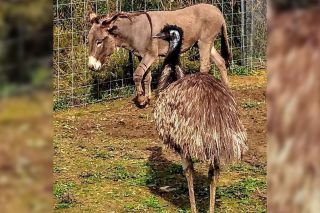 It's a case of cross-species bonding for an emu and a donkey in North Carolina.

According to the Carolina Waterfowl Rescue, a female emu and a male donkey rescued from an abandoned farm in Kershaw, South Carolina, are "in love."

"They like to cuddle and even sleep together," Jennifer Gordon of the rescue told The Charlotte Observer. The rescue is now looking for someone willing to adopt both a donkey and an emu, she said: "That may not be easy."

According to a Facebook post on the rescue's page, the duo has now been dubbed "Jack and Diane."

The endearing pair were living on a farm with dogs, cats and chickens when the owner vanished last week, The Charlotte Observer reported. The rescue has taken in all the animals, but the donkey and the emu appear most tightly bonded. Gordon suspects they've been kept together for years. When the rescue tried to separate them in different pens, the emu started pacing frantically and the donkey began crying, she said. Jack, the donkey, has also attacked other donkeys at the rescue, including one that got near Diane, the emu, according to the rescue's Facebook page.

Cross-species "friendships" are rare in the wild, though plenty of animals develop symbiotic relationships. Warthogs in Queen Elizabeth National Park in Uganda, for example, allow mongooses to groom them. In return, the mongooses get to eat whatever insects they find in the warthogs' fur. This sort of mutually beneficial anti-parasite relationship is common between birds and mammals, and even among fish species, but it's unusual between two mammal species.

In captivity, though, odd animal couples sometimes form. Earlier this year, a clip of a dog and a rescued lion "shaking hands" went viral. The two were confiscated together from an apartment in Mexico and are housed at an animal rescue there. Both lions and dogs are pack animals, so they are naturally social; this is true of the animals in many cross-species couples. At the Myrtle Beach Safari park in South Carolina, Bubbles the elephant bonded with an abandoned black Labrador named Bella. In Australia, a seal named Miri and a dolphin named Jet became best buddies after being raised together, according to Today.

Sometimes, extreme circumstances lead to even odder animal pairings. American black bears are typically loners, with the exception of mothers caring for their cubs. Bengal tigers are also loners. But at Noah's Ark Animal Sanctuary in Georgia, a bear, a tiger and a lion were an inseparable trio for 15 years.