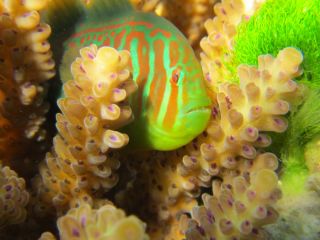 Without the gobies' compulsive cleaning, the algae commonly known as turtleweed, can severely damage a coral reef through bleaching.
(Image: © Cody Clements, Georgia Institute of Technology.)

Who do you call when your coral-reef neighborhood starts going downhill? The goby fish. These inch-long, biotic hedge trimmers enjoy nothing more than removing toxic algae from the knobby skyscraper villages erected by Acropora coral. Good thing, too. Without the gobies' compulsive cleaning, the alga commonly known as turtleweed can severely damage a coral reef through bleaching.

"The gobies are very defensive about their territory. They live in this coral their entire lives and feel like this is their house," says Mark Hay, a Georgia Institute of Technology biologist who studies the unique relationship shared by the gobies, algae and coral.

To learn more about just how the gobies defend their turf, Hay and fellow Georgia Tech biologist Danielle Dixson travel to Fiji, where a defunct dive shop serves as their home, lab and field office. Through a series of laboratory and underwater experiments, Hay and Dixson discovered that the gobies immediately respond to the coral when the turtleweed algae sweeps against it. The coral sends out a chemical that acts like a "911 call" to the gobies. The fish arrive and begin trimming away the seaweed. "It's the combination of the alga and coral together that the fish respond to," says Hay.

What's interesting about this interrelationship is that all involved are native to their habitat. "These are neighborhood players," says Hay. "The fish prefer to live in this species of coral and they know if it's their species being damaged. It's very finely tuned."

In the reef under study, just two species of goby fish take charge of removing the alga — the broad-barred goby (G. histrio) and the redhead goby (P. enchinocephalus). The scientists found that other fish leave the area when the coral comes into contact with the chemically noxious algae. And while both species trim the algae, the broad-barred goby actually consumes it. The turtleweed tidbits help boost the potency of the tiny gardener's own noxious mucus, which it uses to deter predators.

Because Hay and Dixson suspect that these types of behaviors may exist elsewhere, Dixson plans to travel to Australia in the near future to study other goby species in their coral habitats.

Knowing how widespread these behaviors are will help researchers protect Acropora coral. Thesecoral species are important because they form much of a reef's structure and provide a protective habitat for a myriad of other animals and plants.