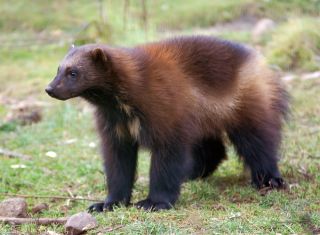 Wolverines look something like a mixture of a dog, a skunk and a bear, with short legs, long hair and elongated snouts. Wolverines also have a distinctive mask of dark fur around their eyes and forehead, and a stripe of blond or ivory fur that runs from each shoulder to the base of the animal's tail.

Though wolverines are the biggest of the weasel family, according to the Integrated Taxonomic Information System (ITIS), they are still very small. They are normally 26 to 34 inches (66 to 86 centimeters) from head to rump. Their tail adds another 7 to 10 inches (18 to 25 centimeters) to their length. They weigh 24 to 40 lbs. (11 to 18 kilograms).

Wolverines are omnivores; they eat both meat and vegetation. Typical meals for a wolverine include large game like caribou, moose and mountain goats; smaller animals like ground squirrels and rodents; and even birds' eggs and berries. They like meat best, though, and will go to great lengths to get it. They can travel 15 miles (24 kilometers) in a 24-hour period in search of food and will even eat dead animals they did not kill.

Wolverines have a keen sense of smell; they can smell prey 20 feet under the snow. They will dig down into burrows and kill hibernating animals.

Wolverines are sneaky when finding food, too. They have strong jaws and teeth, and can crush a carcass and munch right through the bone. They have been known to eat the bones and teeth of their prey.

Wolverines also seem to be aware of how to store food. Research shows that wolverines use snow as refrigerators to keep their food fresh. During times when food is scarce, the wolverines will go back to their stockpile to and retrieve a meal.

Wolverines prefer colder areas because they use the snow for dens, besides food storage. They live in the Arctic and subarctic, in grasslands, Alpine forests, taiga, boreal forests and tundra of Europe, Asia, and in North America in the northern latitudes.

Wolverines are solitary creatures, and need great swaths of territory to roam. Males mark their territory with their scent and only share their turf with females. Their territories can range from 40 miles (65 km) to more than 372 miles (600 km).

These hunters are nocturnal, which means they sleep during the day and hunt at night.

Wolverines are polygamous. This means that a male will mate with several females. They mate from May to August. After mating, females create dens in which to have their young. These dens are often caves dug in the snow and can be up to 15 feet deep.

Females give birth to two or three young at the same time every year, which is usually in the late winter or early spring. Most young are born between February and mid-March.

Baby wolverines are called kits. Kits are born with their eyes closed and are covered in white fur. While the females handle the bulk of the rearing, males will visit from time to time and care for the young.

Sometimes, kits will stay with their mother until they are ready to have kits of their own. Wolverines are ready to reproduce at around 2 years old. Usually, though, kits head out on their own by September, according to The Wolverine Foundation. Wolverines typically live seven to 12 years.

The taxonomy of wolverines, according to the Integrated Taxonomic Information System (ITIS), is:

Wolverines are not endangered. The International Union for Conservation of Nature's Red List lists them as "Least Concern" for extinction, although their numbers are decreasing, especially in Europe, where it is considered "Vulnerable." Their population is estimated to be between 15,000 and 30,000 individuals. The biggest threat to wolverines is climate change. Warmer weather could mean less snow, which wolverines are dependent on for food and reproduction, as mentioned earlier.

When a wolverine takes a step, its paw spreads to almost twice its original size as it presses against the ground. This makes it easier for wolverines to walk on snow. It's like built-in snowshoes.

Other members of the weasel family include skunks, sea otters, badgers and ferrets.

M56 is a wolverine that was fitted with a tracking device near Grand Teton National Park in Wyoming. During just two months, the wolverine walked more than 500 miles.